The terms of trade -- an index that measures a country’s trade performance by comparing the amount of exports and imports -- stood at 100.09 in July, up 0.4 percent from a year ago, indicating that the country is exporting more than spending on imports. 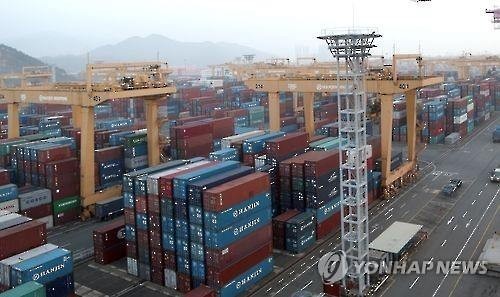 However, the central bank noted that the improvement was mostly due to “a bigger drop in import prices than export prices” on falling international oil prices. Asia’s fourth-largest economy imports all of its energy resources for its economic output.

Export prices fell 8.3 percent in July from a year ago, while import prices decreased 8.6 percent, the data showed.

The terms of trade have been falling since March this year, despite an increase in export volume on-year.

An index measuring export volume came to 139.61 in July, up 0.8 percent from a year ago, but the increase rate has been slowing since May due to sluggish global demand.

With the July index showing export volume falling from 141.22 in June, another index measuring export value fell from 112.38 in June to 111.06 in July. The export value index in July decreased 7.6 percent on-year.

Korea’s export and import prices fell last month for the first time in three months due to falling oil prices and the won-dollar exchange rate, according to the Bank of Korea.

The appreciation of the Korean won, along with the falling oil prices, led both trade indices to decline, the central bank noted.

Low oil prices can be both advantage and disadvantage to an economy, as low energy prices can decrease production costs, enabling companies to manufacture and sell their goods at cheaper prices.

However, it can affect consumer prices and weaken demand. The country’s current account surplus extended its record for the 52nd consecutive month in June, but the record surplus was mostly due to falling oil prices rather than an increase in exports over imports on global demand.