Korean stocks, currency fall on possibility of US rate hike

By Park Hyung-ki
Published : Aug 17, 2016 - 16:08       Updated : Aug 17, 2016 - 16:10
The Seoul stock market took a dive Wednesday following overnight losses on Wall Street after one of the key members of the US Federal Open Market Committee sent a clear message to the world that it could raise its interest rates next month.

Based on strong employment data and positive growth forecast, New York Fed Reserve President William Dudley spoke in a televised interview about the possibility of a rate hike in September. It sent the Dow Jones Industrial down more than 84 points at 18,552.02 on Tuesday. The tech-heavy Nasdaq dropped 0.66 percent at 5,227.11. 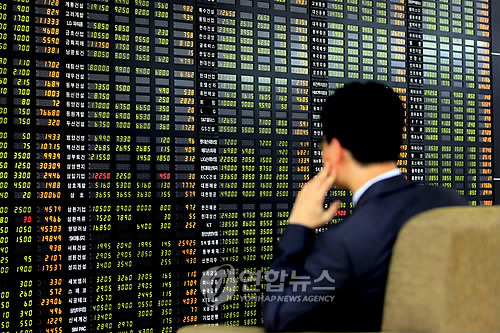 “We’re edging closer towards the point in time where it will be appropriate, I think, to raise interest rates further,” Dudley told Fox Business Network, adding, “I think it is possible,” when asked if the FOMC could move to raise its rate at its next meeting from Sept. 20-21.

His message, which also mentioned global investors are being “complacent,” has weakened Seoul stocks and the Korean currency against the US dollar, with the benchmark Korea Composite Stock Price Index reaching 2,043.75, down 0.2 percent. The Kosdaq also fell 0.74 percent at 693.67.

Even with the US’ positive economic outlook, which Atlanta Fed President Dennis Lockhart also said is expected to “accelerate” in the second half of this year and next year, justifying a rate hike in September, analysts say that the U.S. central bank may keep the rate steady for the time being given its low inflation rate, along with external uncertainties on Brexit and a slowdown in China.

The US consumer price index increased 0.8 percent in July, from a year ago, still well below the Fed’s 2 percent target. A decrease in gasoline and grocery prices eased inflation in the US.

“We believe that the Fed will hold off raising the federal funds rate for now,” said Peter Park, an analyst at NH Investment & Securities.

“Despite the recent strength in US employment indicators, the economic slowdown in China represents a negative -- all Chinese economic indicators missed estimates last week.”

The FOMC raised its federal funds rate for the first time since the global financial crisis in December last year by 0.25 percentage points to a range between 0.25 percent and 0.5 percent.

With expectations of the US Fed increasing its rate and the Korean central bank lowering its rate, which would widen the rate gap between the two countries, the market could face further volatility, analysts say.