Established in 1998, YG Entertainment went public on the KOSDAQ in 2011. In the same year, the company created the joint venture YGEX with AVEX, one of the biggest entertainment businesses in Japan. 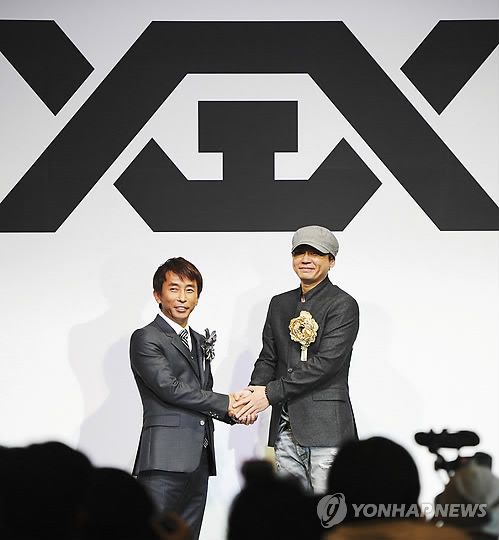 S.M. Entertainment maintains the top spot in South Korea’s entertainment industry with its market capitalization of 641.8 billion won, but YG is aggressively catching up with its hit songs and K-pop groups.

The entertainment mogul has six subsidiaries including the KOSDAQ-listed YG PLUS, operating businesses that span advertisement, cosmetics, entertainer training, golf management and food.

Its biggest source of profits is sales of music tracks, accounting for 25.3 percent of the company’s total sales. Concert revenue makes up 23.4 percent. The rest includes its performing artists’ commercial modeling and some portions of TV show payments for its artists.

With the Korean entertainment industry -- including YG -- increasingly eyeing the Chinese market, the latest tension between Korea and China over the deployment of the U.S.’ Terminal High Altitude Area Defense system on the Korean Peninsula is not helping.

“The share value of YG Entertainment has fallen sharply recently due to the conflict between the two countries,” said Yang Seung-woo, an analyst at Samsung Securities. “Luckily, Big Bang completed their schedules in China by July.”

China’s opposition toward the THAAD system affects Korean entertainers gaining fame in the country. Performances of Korean stars there were abruptly cancelled last month and the broadcasting of dramas featuring Korean actors are being postponed.

As a result, entertainment firms’ stock prices have tumbled for the past month.

On Friday, Samsung Securities lowered its target price for YG Entertainment from the current 60,000 won to 51,000 won.

But analysts kept their “buy” recommendations for investors.

“The fan tours in the third quarter would guarantee high profitability, and the profits from the concerts will be reflected in the company’s fourth-quarter performance,” said Yang at Samsung. “

Analysts shrug off concerns about the anti-Korean sentiment growing in China due to the THAAD issue.

“It is an issue that can be overcome,” said Hana Financial Investment’s Lee. “YG has AVEX, the best partner in Japan and the partner’s efforts to localize Big Bang are significant. Possible losses from the Chinese market could be offset by greater profits in Japan this year.”

Lee forecast YG is going to obtain its biggest-ever profit in the third quarter. “The total number of audiences attending concerts in Japan by YG artists, including GD and Taeyang’s solo performances, would exceed 1.5 million,” he said.

This is the 18th in a series of articles analyzing major companies by market capitalization traded on the tech-heavy KOSDAQ market. -- Ed