South Korea's electricity use set a new record two days in a row on Friday as the country is being hit hard by a sweltering heat wave, the government said. 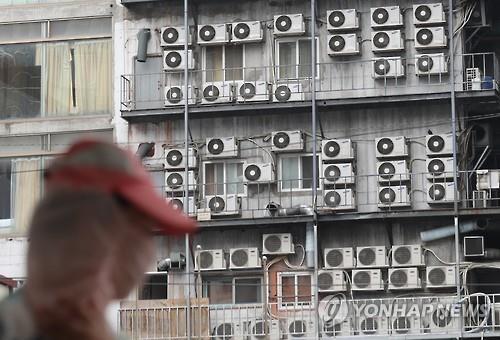 The electric power reserve ratio went down to 8.5 percent, or 7.22 million kilowatts, marking the fifth single-digit ratio throughout the year.

If the figure falls below 5 million kilowatts, a state alarm is automatically issued.

The surge in electricity consumption came as the county has been suffering from scorching heat for weeks, with Seoul's average daily high hovering around 33 C since last week and its daily low remaining over 25 C. The mercury soared to 39.4 C in Gyeongju, southeast South Korea, on Friday, the highest temperature recorded here this year, while the temperature hit 35.9 C in Seoul.

As part of the government's efforts to curb the excess use of electricity, it has issued a warning to over 40 shops and restaurants caught leaving their front doors open with the air conditioning on.

Those who violated the energy-saving guideline will be fined up to 3 million won (US$2,700).

Meanwhile, the number of people this year suffering from heat-related illnesses, such as heatstroke and heat cramps, reached a new record of 1,424 as of Thursday, according to the Korea Centers For Disease Control and Prevention (KCDC). The figure includes 13 deaths.

Surpassing the 1,189 mark recorded in 2013, the number is the highest since the KCDC started monitoring in 2011. (Yonhap)