Seoul shares forecast to move in tight range next week

By 박형기
Published : Aug 6, 2016 - 10:20       Updated : Aug 8, 2016 - 09:47
South Korean shares are expected to move upward in the coming week on the back of foreign buying on eased concerns over a U.S. interest rate hike and recovery in crude oil, but the gains will be limited by institutional selling, analysts said Saturday.

The benchmark Korea Composite Stock Price Index closed at 2,017.94 points on Friday, up 0.08 percent from a week ago. 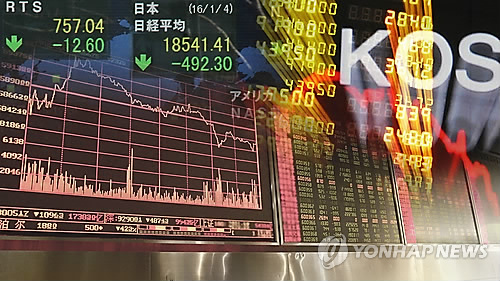 The index started on a positive note as weak U.S. economic growth data lowered the odds of an interest rate hike to reach this year's highest. But it slipped in the next two sessions after crude oil fell below $40 per barrel amid concerns over a supply glut.

The market bounced back after oil prices jumped later in the week to pare earlier losses, helped by the Bank of England's rate cut and stimulus package to stabilize the financial market following the Brexit vote.

By sector, display, insurance and chemicals outperformed the market, while auto, steel and cosmetics were at the bottom.

"Foreign buying will continue to support the market, while capital inflows to emerging markets, including the South Korean market, will slow down amid fluctuating oil prices," said Koh Seung-hee, an analyst at Mirae Asset Daewoo Securities Co.

"Institutions will remain on the selling side to lock in profits for stock funds."

The Bank of Korea will decide the key interest rate on Thursday, with slim chances for a change following a surprise cut in June to a record low at 1.25 percent.

China will release its July trade report on Monday, and the U.S. will report July retail sales on Friday. (Yonhap)