Apple Inc. surprised the local music and mobile service industry Friday by abruptly launching its streaming music service Apple Music in South Korea. The tech giant simultaneously launched Apple Music in 110 countries in July of last year, but had left it unserviced in the South Korean market for more than a year.

Its sudden decision to start up the service drew mixed reactions, raising questions on its impact on the music service industry here, which has so far been dominated by local firms. 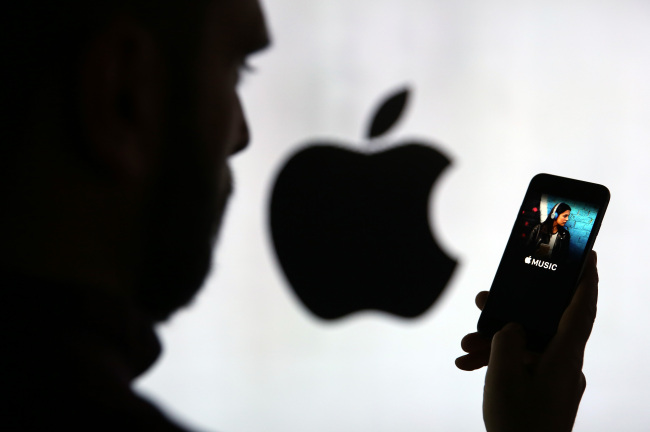 “Although we are keeping an eye on the new service, we don’t think Apple Music will be a game changer because they have fewer K-pop songs,” an official from LOEN Entertainment’s told The Korea Herald.

LOEN’s Melon is the top online music streaming service provider in the local music industry, with a 57 percent market share, followed by KT Music with 21 percent and Bugs with 10 percent.

No. 2 streaming service KT said, “Apple’s service may make the competition fiercer, but we still have an edge in Korean songs, which most local users enjoy."

Although Apple has 30 million songs -- triple Melon’s 10 million songs -- it has fewer K-pop songs because it failed to negotiate with local music firms aside from the big three of S.M. Entertainment, YG Entertainment and JYP. This is because Apple’s policy, which gives 70 percent of sale prices, or discounted prices, to the creators of songs, did not appeal to many music creators.

In Korea, by law, music providers such as LOEN are obliged to give 60 percent of the fixed price -- regardless of how much it allows in discounts to users -- to music creators. Since discounts are very common on music platforms, this means that Apple could be offering cheaper services to clients while giving less in royalties to creators, according to some industry watchers.

But the issue of whether artists will recieve more or less is a controversial point.

Apple Korea’s spokesperson could not be reached for comment, but other  industry insiders said the service, rather than paying less, would bring about fairer wages and level out competition in South Korea.

“For Korean artists, the launch of Apple Music in Korea finally brings a global service with global standards, and most importantly, global rates to the local market,” said Bernie Cho, head of DFSB Kollective, to The Korea Herald.

According to one music industry insider, Apple’s royalties to the local artists are expected to be much higher compared to that of its local streaming rivalries.

“While most companies are using the government standard for royalties as its maximum rate, Apple is using it as its minimum, which means our artists will be paid much, much more for their music than by the other Korean companies,” said the industry insider.

The local music industry has certainly been no stranger to public disputes, with countless artists and unions speaking out against unfair music chart calculations as well as unjust wages for their creative content and services.

Earlier this year, the Korean indie music scene and the Artists Union were in an uproar when a handful of artists who contributed to the soundtrack for popular TV drama “Cheese in the Trap” took to social media to vent their outrage against mega media conglomerate CJ E&M for not paying for their work.

The union also claimed that many artists were being “coerced into signing unjust contracts” and not being “properly compensated” for their music.

The introduction of Apple Music is not only expected to offer better pay for Korean artists, but also possibly a fairer outlet for local consumers as well.

The Apple streaming service comes following recent drawn-out legal battles involving some of the peninsula’s top streaming sites Mnet and Soribada, after the Fair Trade Commission filed a lawsuit when it was revealed the conglomerates were hiking subscription prices without clearly informing consumers, who were automatically charged the higher rates.

The courts ruled in favor of the Fair Trade Commission late last year.