South Korean food companies are set to begin official sales of the traditional chicken soup to China as the first shipments to the mainland have recently cleared customs, industry officials said Tuesday.

Samgyetang is a traditional chicken soup made with a whole young chicken stuffed with ginseng, sticky rice and garlic. It is widely recognized in the country as an energy-boosting meal during the summer months. 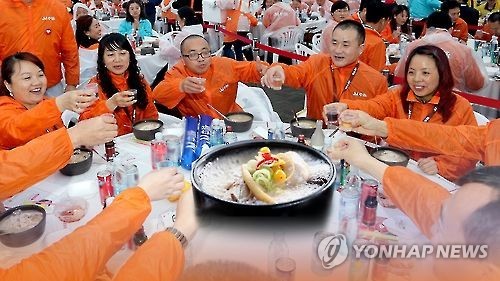 The first shipments of 20 tons of precooked and frozen soup by five Korean companies have arrived at Weihei Port in eastern Shandong Province, getting ready for sales for the first time since the two nations agreed on new quarantine rules last year.

Japanese and Taiwanese supermarket chains have decided to sell samgyetang in local outlets, while talks are currently underway with British chain Tesco and a Hong Kong retail chain, they noted.

The Korean food is also gaining wider appeal from Chinese people as it was featured in popular Korean TV drama "Descendants of the Sun."

While only five poultry firms have received approval from the Beijing government, major food companies are also seeking ways to export samgyetang using their distribution channels in China.

CJ Cheiljedang, a food unit of the CJ Group, and Daesang Corporation, a major food processing company, are also pushing to export samgyetang, with products offered by the preregistered companies.

"An additional 60 tons of samgyetang will be shipped to China between late July and early August," an official from the Ministry of Agriculture, Food and Rural Affairs said, expecting the amount to jump to US$15 million in 2018.

To achieve the target, South Korea is on a marketing drive in China by inviting Chinese tourists to South Korea or holding food trade shows across the mainland.  (Yonhap)