South Korea's government held a hearing on German carmaker Volkswagen's emissions scandal Monday before finalizing a decision that can revoke the certifications of dozens of its vehicle models implicated in the scandal.

The Ministry of Environment conducted the hearing at the National Institute of Environmental Research in Incheon, west of Seoul, which was attended by Johannes Thammer, the chief of the automaker's South Korean unit, and several other company officials. 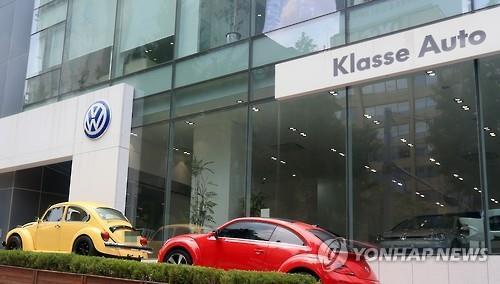 Earlier this month, the ministry said it might revoke the certifications of 79 vehicle models of Audi Volkswagen Korea that are suspected of having obtained local clearance with faked documents about their noise level, fuel efficiency and emissions.

The meeting, hosted by the ministry, is aimed at giving the carmaker a chance to explain its actions before Seoul makes a decision.

After the hearing, which lasted for a little over an hour, Thammer and Audi Volkswagen Korea's executive director Jung Jae-kyun said they fully explained their position in regards to the controversy and will try to find a solution with the ministry and the NIER.

During the closed-door hearing, the carmaker said there could have been some mistakes in the process of drafting the reports, according to ministry officials, who asked not to be named.

On Friday, the automaker said it has decided to voluntarily suspend sales of the problematic vehicles starting this week.

A Volkswagen Korea executive has already been indicted on various charges that include forgery and a violation of the local Clean Air Conservation Act.

The ministry said it will finalize the decision by Friday.

"Volkswagen said it will seek reauthorization," said Kim Jeong-soo, chief of the Transportation Pollution Research Center under the NIER. "As flaws have been detected (in the previous process), we will go through various procedures, not restricted to reviewing documents, before granting them certificates." (Yonhap)