[DECODED: SAMSUNG] The titan that began with Lee Byung-chull

[THE INVESTOR] The late Lee Byung-chull is the founder of the behemoth Samsung, the nation’s top conglomerate, but his legacy is much more than just Samsung. His eight children -- three sons and five daughters -- control several conglomerates that rule the Korean economy today, and they are collectively known as the “pan-Samsung” group.

The Samsung brand today is carried by Lee Byung-chull’s third son, Lee Kun-hee, the wealthiest individual in Korea. He is currently hospitalized after suffering a heart attack, and his son, Samsung Electronics vice chairman Lee Jae-yong, is leading the group on behalf of his father. 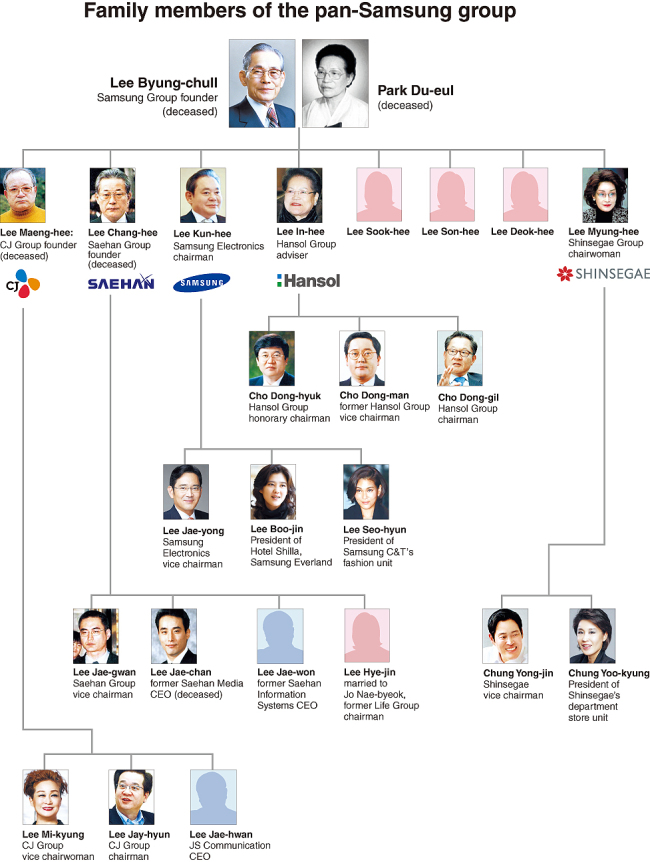 Lee Kun-hee’s siblings now head other major groups in Korea such as CJ Group and Shinsegae Group, which are expansions of previous companies owned by Samsung that have since broken off to form independent entities. CJ Group, which currently leads the market in food and entertainment and is strong in biotechnology and retail distribution, was expanded to its current form by Lee Byung-chull’s grandson Lee Jay-hyun. Lee Jay-hyun is still the chairman of the group, with his sister  Lee  Mi-kyung sitting as vice chairwoman.


Meanwhile, Shinsegae Group, which is a major leader in retail with well-known brands like E-mart, broke off from Samsung and is managed by Lee Byung-chull’s youngest daughter Lee Myung-hee, who remains in charge of the group. Her son Chung Yong-jin acts as vice chairman, while her daughter Chung Yoo-kyung heads the group’s luxury department stores.

Traditionally, the wealth and power accumulated by Lee Byung-chull should have been inherited by his eldest son Lee Maeng-hee. However, that plan became bungled through the so-called “saccharin smuggling incident” in 1966. At that time, Busan officials discovered that Korea Fertilizer Co., a subsidiary of Samsung Group, was trying to smuggle 55 tons of saccharin into the country.

Then President Park Chung-hee ordered an investigation that led to Lee Byung-chull’s second son Lee Chang-hee going to jail, and the senior Lee himself stepping down as chairman of the group. When rumors circulated that Lee Maeng-hee had been involved in his brother Lee Chang-hee’s tip to government officials about his father’s wrongdoing, Lee Maeng-hee fell out of favor, leaving Lee Kun-hee, the youngest son, to inherit the Samsung brand.

The pan-Samsung family’s ties stretch far beyond the business realm. Lee Kun-hee’s wife Hong Ra-hee holds significant influence in the art world as director of Leeum, Samsung Museum of Art. Her brother Hong Seok-hyun is chairman of the major daily The JoongAng Ilbo.

Today, Samsung Group and the other companies led by members of the Lee family hold sway over nearly all major industries in the Korean economy including electronics, retail, construction, and entertainment.