By Park Hyung-ki
Published : Jul 20, 2016 - 16:37       Updated : Jul 20, 2016 - 17:25
Jeong Eun-bo, the vice chairman of the Financial Services Commission, said Wednesday that a task force will be set up to foster constant communication with foreign financial companies operating in the country and address their needs.

This comes as the state financial regulator is concerned over an increasing number of foreign financial companies folding their businesses and exiting the Korean market amid a gloomy outlook and decreasing profitability. 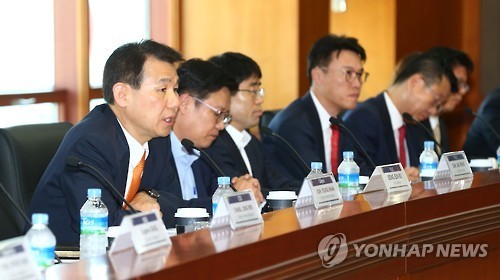 In a meeting with executives of foreign financial companies including Bank of America and Citigroup, Jeong said the regulator will evaluate and see whether Korea is providing a business environment on a par with global standards.

“We cannot ignore the fact that a change of strategy by global headquarters, negative profit outlooks and strengthened financial regulations have led to market exits,” Jeong said in the meeting.

“The regulator will look back and see if Korea lacks in providing a financial environment equal to global standards.”

A growing number of foreign financial companies including Goldman Sachs, UBS and Barclays have exited Korea, with some only leaving behind investment banking services mostly operated by their Asian headquarters in Hong Kong and Singapore, Asia’s financial hubs.

Jeong pointed out that Korea is pursuing structural economic reform including for the advancement of the financial market.

The newly introduced omnibus account system, which allows stock trading via a single account instead of multiple accounts for transactions and settlements, will be fully launched in 2017, the FSC said.

The FSC also said it will seek to advance its forex market by extending the trading hours in Korea, and establish a Korean won-Chinese yuan exchange center in Shanghai.