Dodgers' Ryu Hyun-jin headed back to DL after one start

Los Angeles Dodgers' Korean pitcher Ryu Hyun-jin is headed back to the disabled list after one start.

The Dodgers on Tuesday (local time) placed the left-hander on the 15-day DL with left elbow tendinitis, retroactive to July 9. 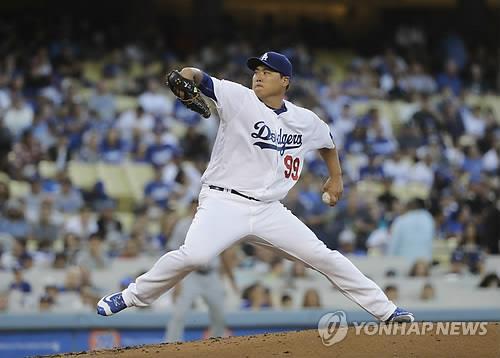 Ryu had been scheduled to start against the Washington Nationals on the road on Wednesday.

Ryu made just one start after returning from surgery to repair a torn labrum in his pitching shoulder. On July 7 against the San Diego Padres, Ryu was touched for six runs on eight hits -- five of which went for extra bases -- in 4 2/3 innings, as the Dodgers were shut out 6-0.

An MRI of the elbow showed no notable changes from previous tests, according to the club. Ryu had Tommy John (elbow reconstructive) surgery in high school in Korea.

Though Ryu is eligible to come off the DL on July 24, the Dodgers have no timetable on his return.

Their rotation has been decimated by injuries all season, but as Ryu moves to the DL, they'll soon welcome back Clayton Kershaw and Alex Wood.

The second trip to the DL is the latest setback for Ryu since his return from surgery in May last year. He missed the entire 2015 season, and then had to deal with shoulder and groin issues during his rehab this year.

Ryu made eight rehab appearances in the minors before returning to the majors. He touched 92 miles per hour with his fastball early on, but in the fifth inning -- his final inning of work -- Ryu failed to touch 90 mph with any of his five fastballs.

The 29-year-old signed a six-year, $36 million deal with the Dodgers before the 2013 season. He's the first player to jump from the Korea Baseball Organization to the majors via posting. (Yonhap)