FSC to toughen rules on stock trades by its officials

Korea's top financial regulator will tighten internal rules on stock trades by its officials, an informed source said Monday, a day after a top prosecutor was arrested on charges of taking bribes in stocks.

The Financial Services Commission plans to revise the ethics code to ban new share trading by officials with a rank of 4 or higher. There are nine ranks for Korean civil servants with grade 1 being the highest and 9 the lowest. 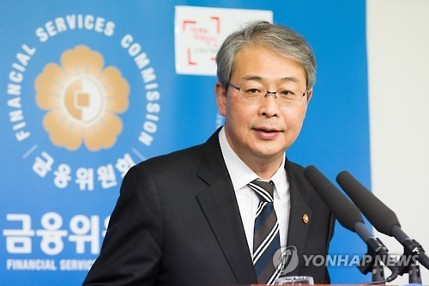 Under the nation's current equity market law, its public servants and employees at related firms face restrictions on their stock trades.

The FSC believes it's not sufficient to head off illicit acts or unethical practices in connection with stock trades. The FSC is a powerful government body in charge of financial regulations and policy making.

"The FSC will revise internal rules to strengthen relevant criteria that will take effect on Aug. 1," the source said, speaking on the condition of anonymity.

They will be allowed to sell existing shares, but they should formally report every trade to the FSC.

Lower-grade FSC officials will be subject to tougher regulations as well.

Currently, they don't need to let the FSC know about stock transactions worth 10 million won (US$8,800) or less. But they will have to submit a report on every transaction.

It remains unconfirmed whether the FSC's move is directly affected by the scandal involving Jin Kyung-joon, a vice ministerial-level prosecutor.

He was arrested on Sunday for receiving some 420 million won worth of shares from the head of local online game maker Nexon Co. in 2005. He is accused of having made a fortune via allegedly collusive stock transactions including the sale of shares in Nexon's subsidiary in Japan shortly after it went public in 2011. (Yonhap)