Choi Ji-man of the Los Angeles Angels picked up his first major league RBI and steal in a victory.

Batting fifth, the Korean first baseman went 1-for-3 with an RBI, a steal and a run scored, as the Angels defeated the Chicago White Sox 8-1 at Angel Stadium in Anaheim on Sunday (local time). 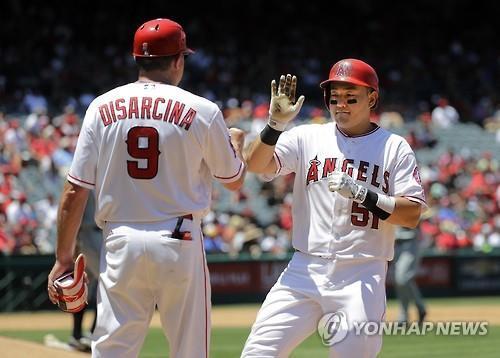 Choi, who was called up from the minors just before the All-Star break, also extended his hitting streak to four games. The long-time minor leaguer, who made the Angels' Opening Day roster but was demoted after a slow start, is filling in for injured C.J. Cron at first base.

Choi singled to left in his second at-bat in the bottom fourth and swiped second base for his first big league steal. He came around to score on Jett Bandy's double.

Then with the bases loaded and no outs in the fifth, Choi hit a sacrifice fly to center to bring home Mike Trout. Choi is batting .156 in 19 games this season.

Two other Korean major leaguers missed Sunday's action with injuries. Kim Hyun-soo of the Baltimore Orioles, who strained his right hamstring in the final game of the first half on July 10, missed his third straight game. The Orioles lost to the Tampa Bay Rays 5-2.

The outfielder, however, will likely avoid a trip to the disabled list Manager Buck Showalter said Kim will travel with the club to New York for a series against the Yankees and added, "We think he's close (to returning to action)."

Choo Shin-soo of the Texas Rangers has also yet to play since the All-Star break, missing all three games with lower back stiffness. Though an MRI showed no major issue, Choo was still held out of the lineup in favor of Nomar Mazara.

Choo has had two trips to the DL this season: first for a calf and then a hamstring injury. He has only played in 31 of the Rangers' 93 games so far. (Yonhap)