Seoul Arts Center’s Calligraphy Museum has brought together a rare collection of still life paintings from the Joseon era, depicting stacks of books with decorative luxury items, which were popular among royals and aristocrats. In contrast, the exhibition also features paintings of Chinese characters that wealthy commoners hung in their homes to emulate the upper class’ cultural tastes.

A total of 58 still life paintings of books and paintings of Chinese characters, dating from the 18th century to the early 20th century, are on display in a two-part exhibition at the refurbished Calligraphy Museum until Aug. 28.

The still paintings of books placed on shelves along with decorative items became the most popular genre of paintings in the 18th century Joseon. They also offer a window into the popularity of luxury items among the upper-class. 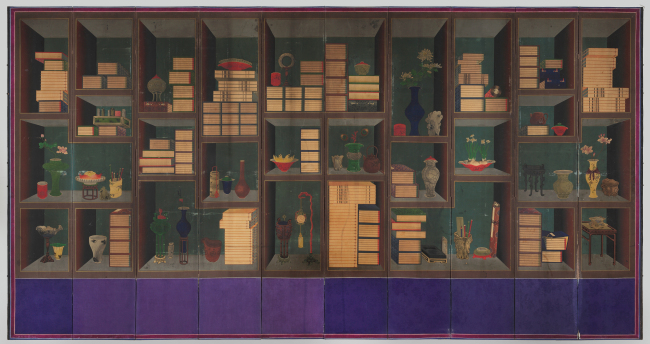 "Chaekgeori, Scholar’s Accoutrements,” 19th century (The National Museum of Korea)
Introduced from China, these still life paintings feature exotic and precious goods such as eye glasses, fruits such as watermelon and peach, luxurious furniture pieces, stationary items and ceramics that were imported from the Qing Dynasty China or European countries.

“The isolated Joseon started to have trade exchanges with China in the latter part of 18th century. Aristocrats preferred to use tableware and furniture that were made in China. This lifestyle was criticized by the King Jeongjo,” wrote Chung Byung-mo, a professor of Gyeongju University, in an essay about the painting.

Ironically, it was King Jeongjo who loved to appreciate the still paintings of books in his office, and ordered that an old painting be replaced with a still painting of books.

“He was very fond of the paintings of books, and that’s how it became popular among upper-class scholars and government officials,” wrote Chung.

"Scholar’s Accoutrements in a Leopard Skin,” 19th century (Leeum)
The still paintings of books eventually spread to wealthy commoners, who regarded them as signs of their success in business.

The still paintings of books widely enjoyed by commoners differed in style from the court still paintings. They featured animals like dragons and birds that, for commoners, symbolized happiness.

Wealthy commoners also enjoyed having paintings of Chinese characters during the later Joseon days amid shifts in the centuries-old social class structure. They desired to stand equal with the upper-class scholars and displayed paintings that portrayed letters at home. 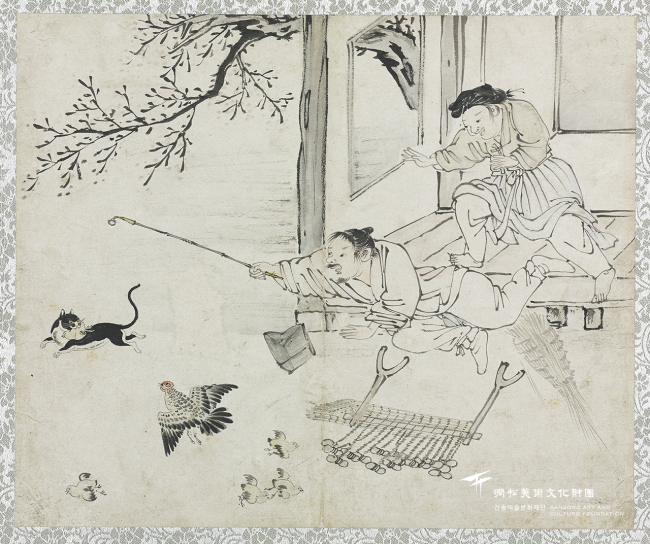 "Feral Cat Steals a Chick” by Kim Deuk-sin (Kansong Art and Culture Foundation)
While Joseon’s still paintings offer a glimpse into the cultural tastes of people of Joseon and shifts in social classes, the genre paintings on view at the Dongdaemun Design Plaza deliver honest depictions of the lives of commoners and scholars of Joseon with a humorous touch.

The genre painting showcase is the last in the series of exhibitions of Joseon paintings held by Kansong Art and Culture Foundation. Starting last year, the foundation has shown paintings of landscapes, plants and animals at the DDP.

“The genre paintings are particularly loved by audiences because they are realistic and vivid depictions of the lives of ordinary people of Joseon,” said Kim Ju-hee of the foundation.

Some of the most widely known masterpieces in the Kansong collection are on display, including the “Portrait of a Beauty” and “A Dano Day Scene” by painter Shin Yun-bok.

"Portrait of a Beauty” by Shin Yun-bok (Kansong Art and Culture Foundation)
Humor was an important part of genre paintings. Painter Kim Deuk-sin captured a scene in which a cat snatching a chick startles the hen next to it, making it desperately chase the cat. The sudden hassle prompts the husband and wife working inside the house to stop their work and rush out to catch the cat.

The exhibition “Korea Genre and Figure Paintings” runs until Aug. 28 at the DDP.