In a survey conducted by Yonhap Infomax, the financial news arm of Yonhap News Agency, all 12 economists polled predicted the Bank of Korea to assume a wait-and-see mode, partly to gauge the effect of its latest rate cut but also because of growing household debt. 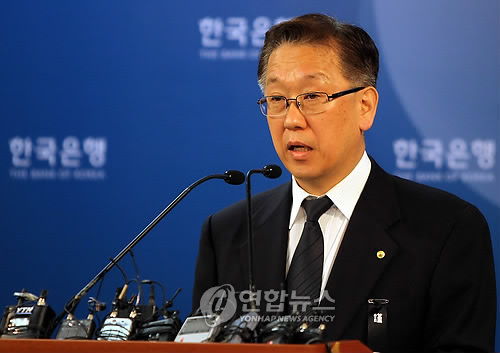 "The central bank will likely wait to see the impact of the June rate cut before easing policy further," said Emily Dabbs, an analyst from Moody's Analytics. "Persistently low inflation across Asia is prompting central banks to ease monetary policy. We expect this will allow the BOK to keep monetary policy settings accommodative, but the high level of debt will likely hamper the bank's ability to ease further."

The BOK's monthly rate-setting meeting is scheduled for Thursday.

South Korea's consumer prices have apparently been growing at an alarmingly slow pace, forcing BOK Gov. Lee Ju-yeol to hold an emergency press briefing on Thursday to explain reasons for such a low growth.

In the first six months of the year, consumer prices have gained 0.9 percent, far short of the BOK's 2 percent target for the 2016-2018 period. The central bank chief is required to offer explanations for the bank's failures to meet inflation targets when the actual growth deviates from its target by more than 0.5 percentage point for more than six months.

A majority of the economists surveyed, however, forecast an additional rate cut down the road, citing a need to further support the local economy, as well as the government's new stimulus package that includes a 20 trillion-won supplementary budget.

"The basis to expect an additional rate cut includes an increased need to support economic recovery amid growing uncertainties sparked by Britain's vote to leave the European Union in addition to well-expected downward pressure on the economy stemming from the ongoing corporate restructuring," Samsung Securities economist Lee Seul-bi said.

South Korea's exports, a major driving engine for growth here, have dipped for 18 consecutive months since the start of last year.

Out of the 12 economists surveyed, eight predicted the BOK will cut its key rate to a new record low of 1 percent in August. (Yonhap)