By Korea Herald
Published : Jul 7, 2016 - 15:55       Updated : Jul 8, 2016 - 09:31
The tycoons of Korea’s top 10 family-run conglomerates, or chaebol, control their empire with less than 1 percent of equity stake ownership, but are backed by a record-high level of intragroup shareholdings, the nation’s antitrust agency said Thursday. 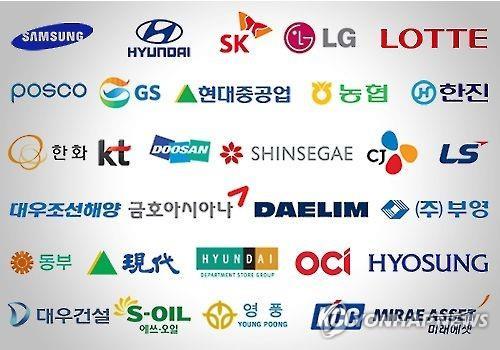 This meager direct stockholding is, however, backed by 54.9-percent control exercised by affiliates through complicated intragroup share arrangements, including the highly-controversial cross-shareholding.

Internal ownership -- encompassing treasury stocks, shares held by the controlling owners, affiliate companies and all others who are friendly to them -- now stands at a record-high 57.6 percent, a marked increase from the 44 percent reported in 2010.

“It seems that the controlling families, as their business grows, are opting to rely more on the overall internal ownership, rather than their own direct stakeholdings,” FTC’s Kim Jung-ki explained in a media briefing.

When it comes to cross-shareholdings -- long viewed by corporate-governance experts as the most problematic practice of Korean conglomerates -- there have been some notable improvements, Kim said.

Cross-shareholding arrangements dropped sharply to 94 from 459 a year earlier, mainly due to Lotte’s actions.

Lotte, whose ownership structure is by far the most complicated of Korea’s entire 65 large conglomerates with assets in excess of 5 trillion won, has reduced its cross-shareholding tie-ups to 67 from 416 in the past year. Still, it accounts for 71.3 percent of the 65-group total.

Aside from Lotte, seven other conglomerates, including Samsung and Hyundai Motor, still employ cross-shareholding practices. Last year’s tally was 11 conglomerates.

The antitrust body’s report also showed an increase in chaebol-owned financial companies’ ownership of shares in their affiliates.

Of the total 1,736 companies affiliated with the 65 conglomerates, only 250 are publicly traded, taking up 12.9 percent of Korea’s 1,931 listed companies. But these companies account for 56.6 percent of the total equity capital.