By Claire Lee
Published : Jul 4, 2016 - 16:41       Updated : Jul 4, 2016 - 18:21
An upcoming TV drama series “loosely inspired” by real-life female weightlifting champion Jang Mi-ran is creating controversy among Koreans online for casting a model and actress, as well as its plot which features the protagonist falling in love with a physician at a weight management clinic. 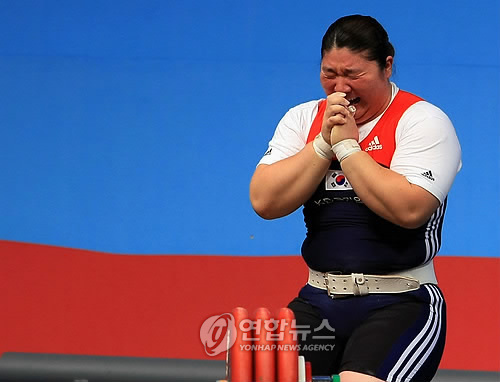 Jang is a legendary Olympic champion in South Korea, having won the gold medal at the 2008 Beijing Summer Olympics in the women’s over 75-kilogram category, after winning silver at the Athens Games in 2004. She is also a four-time world champion. On top of her prolific career -- which includes setting a new world record in Beijing by lifting a total of 326 kilograms -- Jang is known for her humility and optimism.

Yet instead of focusing on the protagonist’s athletic career, the upcoming MBC series, tentatively titled “Lifting Fairy Kim Bok-ju” will dramatize the imagince romance, according to reports by local dailies.

One commentary wrote: “The young lifter has no dating life because of her line of sports, but her life turns upside down as she falls for a doctor at an obesity and weight management clinic.”

The writer of the show, Yang Hee-seung, reportedly spoke to Jang many times, taking into account her real-life experiences when writing the script.

Some Koreans criticized the show, saying the script has no connection to Jang’s life and centers on lookism.

“Why would a weightlifter visit a weight management clinic? That makes no sense,” an online commenter wrote via Twitter. Another asked, “Why does the show even need Jang’s perspectives if the story is about a weightlifter falling in love with a doctor at an obesity clinic?”

Some also pointed out that the actress who has been cast for the lead role does not represent Jang and other female weightlifters.

According to news reports, Lee Sung-kyung, a slim 25-year-old model and actress, has been chosen for the role.

There have been many TV drama series and films in South Korea that feature plus-size women struggling with their body image.

Director Kim Yong-hwa’s 2006 box office hit “200 Pounds Beauty” was about an overweight singer who undergoes intensive plastic surgery and dieting to become a pop sensation. Upon losing weight, she also finds herself in a fulfilling romantic relationship.

In 2015, model-turned-actress Shin Min-a starred as an overweight attorney in the KBS2 drama series “Oh My Venus.” For the role, the slim-figured actress had to sit through a three-hour makeup and prosthetics session for each shoot.

Many critics have pointed out that real-life plus-size actresses are seemingly invisible in the entertainment industry.

“The problem with these narratives is that the women protagonists only become successful and happy after they lose weight (instead of being accepted and appreciated as they are by others),” said professor Shim Mi-seon from Soonchunhyang University’s mass communication department.

“The concept used in the upcoming series is definitely problematic. But there have been so many similar drama shows and films in the past and they were hugely popular. Few people find such narratives to be problematic and producers believe such stories attract more viewership.”

Kim Bit-na, a spokeswomen for MBC, said she could neither confirm nor deny whether the script indeed features a romance between a weightlifter and a physician at an obesity clinic.

Although it is true that actress Lee is currently being considered for the role, it has yet to be confirmed, Kim added.

“All we can say for now is that it is about a young, female weightlifter and it is set to be broadcast in November,” she told The Korea Herald. “The script may change as we develop it further in the future.”