South Koreans' meat consumption has been rising over the past decade, while their intake of rice has been on the wane, a report showed Wednesday.

According to the report by the National Agricultural Cooperative Federation, meat accounted for an average of 15 percent of household spending on food between 2013 and 2015. The figure was up from 12.9 percent recorded over the same three-year period a decade earlier. 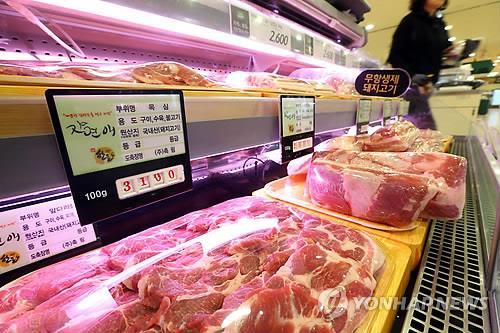 The increase in meat consumption was attributed mainly to South Koreans' tendency to eat out more and their Westernized tastes.

Also responsible was a rise in imports as the local market opened to foreign countries, it said.

In contrast, South Koreans' consumption of rice, other grains and vegetables dropped sharply over the period.

Grains took up 6.1 percent of total household food expenditures between 2013-15, down from 10.6 percent a decade earlier. The percentage of spending on vegetables fell 1.4 percentage points over the cited period.

As meat consumption rises, South Korea should make efforts to ensure a stable supply of meat because it relies on imports for more than half its needs, the report said.

According to a government report released in April, South Korea's meat consumption has soared nearly five times in about three decades due to changes in people's tastes and eating habits. (Yonhap)