Life of Lee Jung-seob at a glance

While fleeing from the plight of war, he sketched and painted optimistic images of children playing with chickens and crabs. He and other contemporary artists pledged to create art and hold exhibitions in the devastation of the three-year war that has technically not ended, with an armistice agreement having brought a temporary truce on the peninsula.

“Such life is hard to imagine when you think about what you would do if a war broke out today. But life continued despite the war. People painted, got married and gave wedding presents,” said Kim In-hye, the exhibition curator while standing in front of the small painting depicting a dove and a hand symbolizing wedding vows. Lee had given the painting to a poet friend who got married during the war.


It is one of some 200 artworks by the painter that are currently on view at the exhibition marking the 100th anniversary of the birth of the Korean art master Lee Jung-seob at the National Museum of Modern and Contemporary Art, Korea. The paintings, on loan from private collectors and art institutions such as the Museum of Modern Art in New York, span Lee’s short 40-year life and his 20-year career from the 1930s to 1950s.

“His life and art are inseparable. When you look at his paintings, you can trace the ups and downs in his life, including the time he was happy living with his family, or depressed after being separated from them,” Kim explained.

The exhibition begins with the Japanese colonial period in Korea in the 1910s. Born in the now North Korean region of Pyeongwon, South Pyeongan Province in 1916 to a wealthy family, Lee studied art in high school and at age 20 went to Tokyo to continue his art studies. 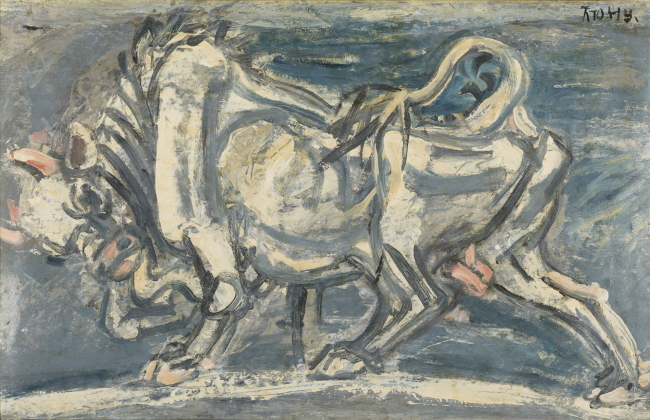 "White Bull" (1953-54) by Lee Jung-seob (MMCA)
One of his earliest works on display at MMCA is the 1941 pencil sketch of a bull, which Lee showed at a group exhibition in Tokyo in 1942. It is the first of Lee’s series of works depicting a bull -- a symbol that represented Korea under Japanese colonial oppression and his favorite subject used in expressing his emotional state.

Sketches that depict his ill-fated motherland are soon replaced by images that depict happy children from 1950 when he had two sons with his Japanese wife Masako Yamamoto who he had met while they were both students at Bunka Gakuen. Yamamoto took on the Korean name Lee Nam-deok following their marriage in Korea.

While fleeing from the plight of war from the North Korean city of Wonsan to Seogwipo, Jejudo Island and to Busan, Lee was happy with his family. They struggled to make ends meet, living in a tiny room in Seogwipo, Jejudo Island, that measured a mere 1.5 meters by 2.4 meters. It is here that Lee created paintings that portray children playing with crabs and fish, in cheerful colors. Lee’s wife later recalled that it was the happiest time for the family.

Such happiness soon came to an end when Lee’s wife left the country for Japan with their two sons in July 1952 as the living conditions in wartime Korea deteriorated. The separation was meant to be temporary.

Lee sent numerous letters to his wife and children hoping that they would soon be reunited. He painted and wrote to express his love and longing for his wife and children, and his desperation to see them again.  Sixty letters, consisting some 160 pages, remain today, and some of them are being exhibited. 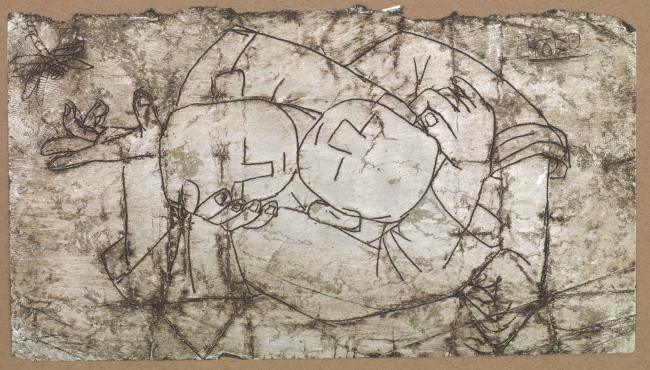 When art materials such as paper and paint became scarce during the war, Lee used the foil lining of cigarette packs as canvas. He scratched lines into the tinfoil, applied paint and wiped it away, leaving colored etched lines that portrayed subjects such as a happy family, a couple, happy children and animals.

Three of his small tinfoil drawings were purchased by Arthur McTaggart, director of the U.S. Culture Center in Korea, in 1955, and donated to the Museum of Modern Art New York a year later. MOMA’s decision to include Lee’s foil drawings in its collection is considered the start of Lee’s posthumous fame. 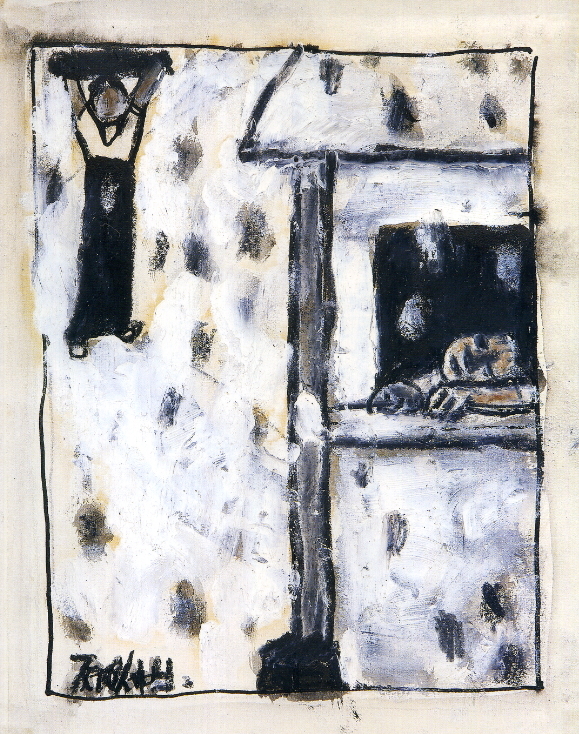 "The River of No Return" (1956) by Lee Jung-seob (MMCA)
Lee moved around the country in an attempt to earn money for a trip to Japan and to buy bicycles for his two sons. Following a weeklong visit to see his family in Japan in July 1953, Lee was full of optimism that he would be able to permanently reunite with them soon. From 1953 to 1954, Lee lived in Tongyeong, earning a salary from teaching at a craft school that taught how to make lacquerware inlaid with mother-of-pearl. It was here in the picturesque southern port city that Lee created many of his masterpieces, including his bull series and numerous oil paintings depicting the beautiful seascape of Tongyeong.

However, Lee lived in extreme financial hardship most of the time, which caused him great despair. He failed to collect money from the sales of his paintings at his ambitious solo exhibition at the Gallery of Midopa Department Store in 1955 and another exhibition at the gallery of the U.S. Information Service in Daegu that same year.

Eventually, Lee’s health deteriorated rapidly and he had to be frequently hospitalized. His famous bull paintings from this period are without the bravery and energy of the previous bull paintings. Instead, the bull is fragile, dripping blood or gray, sapped of all its vigor. Without fulfilling his wish to see his family one last time, Lee died alone on Sept. 6, 1956 at the Red Cross Hospital in Seoul, with no close friends or family by his side.

Four days after his death, his artist friends visited the hospital and found out about his passing. They were able to bury him only after paying Lee’s unpaid hospital bills that totaled 180,000 won.

The exhibition runs until Oct. 3 at Deoksugung Palace Museum of the MMCA. For more information, visit www.mmca.go.kr.