According to Chaebul.com, a total of 23 people held domestically traded stocks worth over 1 trillion won and their combined stock value reached 65.42 trillion won as of June 3, slightly down 1.1 percent from early this year. 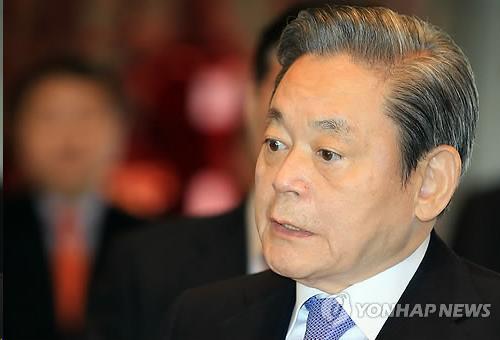 Chairman Lee maintained the No. 1 position with the value of his equity assets rising 5.3 percent to 11.798 trillion won during the cited period, the corporate information provider said on its webpage.

Samsung Group's heir apparent, Lee Jay-yong, meanwhile, is in the process of taking over control of the country's biggest conglomerate from his 74-year-old father Kun-hee, who has been hospitalized since suffering a heart attack two years ago.

Hong Ra-hee, wife of the ailing chairman and mother of Jay-yong, Boo-jin and Seo-hyun, ranked 13th with an equity asset of 1.49 trillion won, Chaebul.com said. (Yonhap)