Busan artists group Exotic Beasts will be holding the exhibition, themed on “home,” to highlight refugee issues and raise money for a local support center.

“There’s a concept of home that people have. There’s an expat community (here) and for them, it’s always going to be where they come from,” said exhibition organizer Niall Ruddy “But there’s an estimated 60 million people that don’t have a home.”

The idea behind the exhibition started with the refugee crisis in Europe, which Ruddy saw firsthand when he returned to Ireland around the time that 3-year-old Alan Kurdi drowned crossing from Turkey to Greece.

“That was a big deal, obviously, it highlighted the refugee crisis for a lot of people while I was home,” said Ruddy. “And a lot of people were organizing cars or vans of people to travel to Calais (in Northern France) or travel to Greece to help, and then I guess over the next couple of months there was more of a backlash. It was almost like a celebrity story.”

Returning to Korea in September, Ruddy still wanted to do something to help the situation, and teamed up with Exotic Beasts founder Jeongmin Lee for the exhibition. They later decided to broaden the focus to a less European-centered view of refugees and help a local charity that assists North Korean refugees.

“People who are American or not European may have their own ideas about what the word refugee means to them, and a lot of people here have a connection to that (local center),” explained Ruddy. 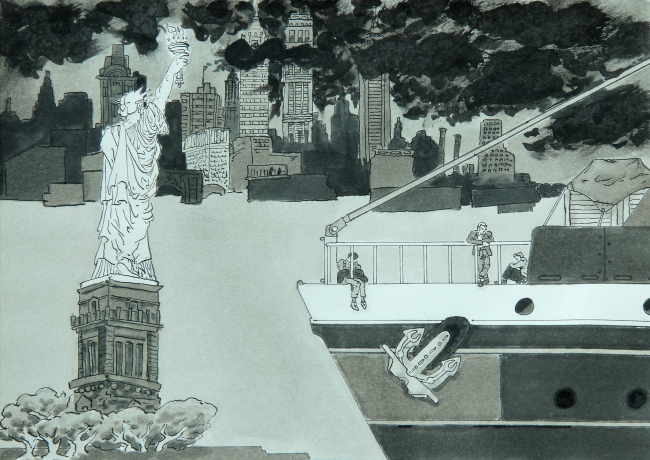 “The final image of the immigrants arriving in America to take flight from war is intended to be cold. Often arrival isn’t the end to a refugee’s hardships. In each successive picture the figures become smaller and more obscured to show their decline and detachment,” said Melson.

Posters and postcards will be available for purchase and there will be a silent auction of 12 selected works of art to raise money at the show.

Proceeds from the show will go to Busan Hana Center, a government-supported facility that assists North Korean refugees with housing, educational services and their needs while transitioning to life in South Korea.

Following the show will be Momgajim 3, a quarterly performance series bringing together physical performers from across Korea to collaborate on new work.