‘Hamlet’ gives rise to a comedy

JEONJU, North Jeolla Province -- After kicking off to a lively start with a fireworks-filled opening ceremony and an outdoor screening of this year’s opening film “Born to be Blue” Thursday night, a number of interactive sessions are underway at the Jeonju International Film Festival.

In addition to screening some 200 movies at cinemas dotted along the city’s Cinema Street, Korea’s largest indie film festival is hosting programs such as Talk Class -- a small group meeting of filmmakers and audiences -- and Cinema Class, where filmmakers engage in in-depth conversations about notable films on this year’s program.

On Friday, Korean actor Jang Hyun-sung asked filmgoers to pay more attention to small-scale, well-made films such as those featured at JIFF. 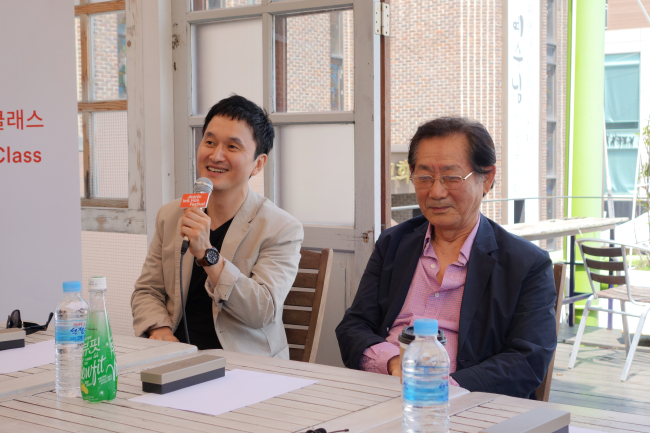 “Thank you for participating as active filmgoers,” Jang told a group of reporters, film industry personnel, film students and general audience gathered at the rooftop of Cafe Haruilgi.

“Because huge capital is invested into movies these days, we cannot ignore the commercial aspects. The investment has to be recouped, so we get a lot of movies that are like well-fabricated industrial products. We need those kinds of movies, too, but I hope people will also pay attention to smaller scale films that have good quality production.

“That’s the slogan of JIFF, to showcase diverse and alternative films.”

Jang, who starred in films such as “Shiri” (1999) and more recently, “The Advocate: A Missing Body” (2015), was at JIFF with his new film “Curtain Call,” directed by Ryu Hoon, which is screening here in the Korean Competition category.

“Curtain Call” is a comedy about a theater troop that tries to put on an authentic rendition of the Shakespeare play “Hamlet.”


“It’s a film about making a play. ... It captures the struggles of artists and also the comedy that ensues from those struggles,” said Jang. “It doesn’t try to be just funny, but captures the loneliness and hardships of young actors and old actors, and moments that are weirdly funny.”

Starring alongside him in “Curtain Call” is Jeon Moo-song, an iconic figure in Korean theater and cinema. Jeon began his career on stage in 1964 and has since been active in film and television as well. Notable performances include his award-winning role as an eccentric monk on Im Kwon-taek’s 1981 film “Mandala.”

“It’s been almost 55 years since I first started on stage, and I am still in the process of figuring out what the ‘right’ form of expression is,” said Jeon.

“When I was first starting out, my teachers told me that you first need to become human to be an actor. I wondered, ‘What does being human mean?’ Theater, I think, is the best way to get the answer to that question. I’m still in the process of finding the answer.”