“If the related law doesn’t obtain parliamentary approval, the restructuring will be delayed by two to three years, resulting in weakening of competitiveness over other global bourse operators,” said an official at the Korea Exchange. 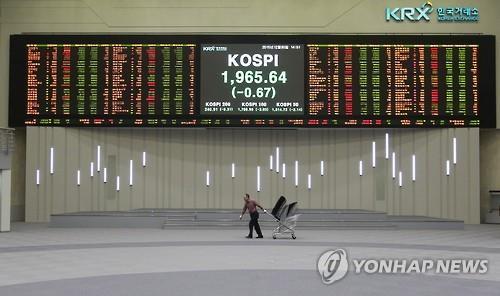 The KRX had planned to launch its initial public offering during the fourth quarter this year after receiving approval from financial regulators and the parliament. The firm also hopes to convert itself into a holding company and its individual markets -- benchmark KOSPI and the tech-laden KOSDAQ -- into affiliated companies.

Now, the long-stalled amendment of the capital market act is on the verge of lapsing if lawmakers don’t pass the bill before May 30 when the new National Assembly convenes.

“Going public and adopting a holding company system is the only way to diversify the business and pull up profits,” he said.

In neighboring Japan, shares of the Tokyo Stock Exchange and Osaka Securities Exchange, which merged and went public in January 2013, surged as much as 3.8 times a year later.