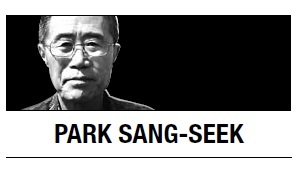 The Environmental Agency of South Korea says that 30-50 percent of fine dust in South Korea originates from China and one of the main culprits is diesel cars, but most Korean people believe that most of the fine dust comes from China.

The important fact is that public health in Korea is in serious danger.

Unless the government and the industries and the people who are producing fine dust jointly make all-out efforts to eradicate the causes of the environmental threats, particularly fine dust, all Koreans, the present and future generations, will suffer from all kinds of deadly ills.

The environment issue is a global issue that requires a global solution. This was the reason why the U.N. Conference on Environment and Development was held in Rio in 1992. Since then the U.N. has been making great efforts to realize sustainable development to protect the global commons. The U.N. Framework Convention on Climate Change held its 21st meeting in Paris toward the end of the last year, adopting a milestone agreement and deciding to keep the global average temperature increase well below 2 degrees Celsius above pre-industrial levels.

Environmental issues can be classified into two broad categories in terms of geography: issues that affect the entire globe and the issues that affect particular regions or individual states; and in terms of length of time needed for solution: whose that require a long time to solce and those that can be solved in a short time. Global warming is an issue affecting all humanity and states and requires a long time to reduce it, while fine dust, yellow dust and haze usually originate from a country or region and cause fatal diseases and can be controlled in a relatively short time frame.

Regardless of the scope, impact and degree of difficulties for solution, environmental issues are largely caused by humans. Humans pollute the environment mainly for economic development. The West resorted to capitalism and science and technology for rapid economic development. Western civilization provides a philosophical foundation for the relationship between the human and nature: war. On the other hand, oriental civilization provides a different philosophical foundation: humans are subordinate to nature.

Asian states have belatedly found out that capitalism and science and technology are the best way to accelerate economic development and eradicate diseases and have followed the Western worldview: challenging nature. In order to catch up with the West, the East mercilessly destroys nature. Asian countries burn their mountains, turn their lands into deserts, and produce all kinds of chemical agents that cause fatal diseases. Now the West and the East have become strange bedfellows: destroyers of nature.

However, they are faced with a dilemma. Humanity can eradicate poverty but cannot enjoy health. This is the reason they reluctantly adopted the doctrine of sustainable development. Sustainable development is an attempt to continue to promote economic prosperity while maintaining public health. But you can’t have your cake and eat it. Nature will eventually win.

In military security states are main actors and their victims are people, while in environmental security the producers of toxic materials are the industrial and business communities and their victims are consumers. Environmental crises occur when the industrial and business communities destroy the public goods for the production of private goods and services, and the government acquiesces in or tolerates what economists call externalities created in the process of producing private goods and services. Since all people desire material well-being, the government suffers from a dilemma — to what extent should it tolerate environmental degradation?

Now is the time for the Korean government to securitize environmental issue. In other words, it should turn the air and water pollution issue into a kind of national security issue. WHO designated the exhaust gas from diesel cars and fine dust as group 1 carcinogens in 2012.

The government has to deal with this issue on the domestic and international levels because air pollution is originated from both Korea and China. South Korea, China and Japan have been dealing with the environmental issues through the Tripartite Environmental Ministers Meeting since 1999.

But they have been unable to come up with any concrete measures to deal with the air pollution issue. South Korea should confront China in a more aggressive manner and at the same time it should eradicate the internally originated toxic gas. We should remember that humans can live without states but cannot without the global commons. Without controlled development humans cannot preserve the global commons, and without nature humans cannot survive but nature can survive without humans. Therefore, now humanity needs neither the Western nor the Eastern worldview but a globalist world view — cooperation between humanity and nature.

Park Sang-seek is a former rector of the Graduate Institute of Peace Studies at Kyung Hee University and the author of “Globalized Korea and Localized Globe.” -- Ed.