'Descendants of the Sun' secures 12.2 bln won worth of ad deals

"Descendants of the Sun," the just-closed sensational TV series, rewrote the history of commercial success for terrestrial networks' weeknight dramas.

The KBS 2TV's mini-series secured a combined 12.2 billion won ($10.6 million) worth of advertisement deals, including virtual advertising and PPL, according to sources in the broadcasting industry. 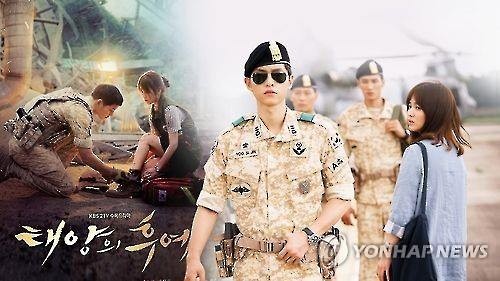 The sum is close to the show's total production cost of 13 billion won and more than double the number of MBC TV's 2014 hit drama "Pretty Woman."

All 28 fifteen-minute TV commercial spots running before and after the drama were sold out, which is rare for a weeknight series. The number rose to 32 from the 7th episode as the show's viewership rating kept going up.

The situation was the same with advertisement deals for the drama's weekend reruns. All of its 24 fifteen-minute advertisement slots were sold out from March 12 when the fifth and sixth episodes were replayed. The number was later increased to 28 boosted by the show's popularity both in South Korea and China.

The 16-episode drama concluded on Thursday night with 38.8 percent viewership, its highest yet.

Industry sources say this is a huge success at a time when terrestrial television networks struggle against the waning number of watchers and ever-rising challenges from cable TV programs.

"Before, the average viewership of terrestrial stations' mini-series fell to the 3-5 percent level and it was difficult for them to exceed even the 10-percent mark," an industry official said. (Yonhap)