The surprise outcome came after months of heavy political wrangling over the redrawing of electoral maps, legislative inaction and nomination feuds, prompting young voters to head to polls and traditional support bases to turn the other way.

The Saenuri Party’s disappointing performance is also expected to deal a significant blow to the administrative drive of President Park Geun-hye as she is left without sturdy backing from a ruling party majority.
The Saenuri Party won 122 seats in the 300-member National Assembly, trailing the main opposition The Minjoo Party of Korea, which won 123, according to the National Election Commission.  The People's Party gained 38 seats.

The exit polls conducted by the nation’s three broadcasters, KBS, MBC and SBS, predicted that the ruling party could win 118-147 seats, while The Minjoo Party is likely to claim 97-128 seats. The fledgling People’s Party was said to secure 31-43 seats in total.

All three polls showed the ruling camp to have fallen under the 150-seat mark needed for a majority, and way below the ambitious 180-seat line needed to pass bills without opposition consent. 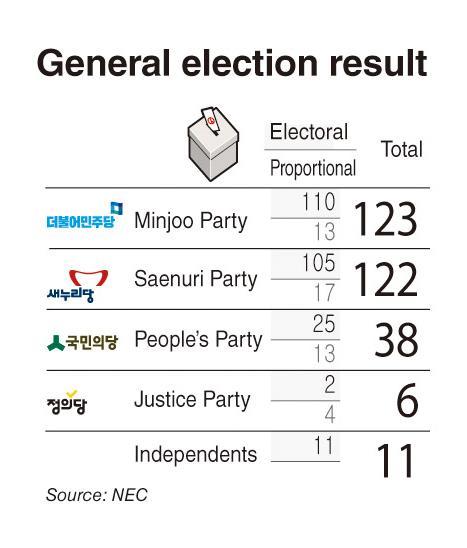 The nation’s total voter turnout stood at 58 percent, up from the 54.2 percent of the 2012 election.

The National Election Commission attributed this higher-than-expected turnout to the two-day early voting system that took place last week, allowing voters to cast their ballot in advance. The turnout for early voting was 12.2 percent.

The ruling party mostly managed to safeguard its key strategic constituencies in Busan and the Gyeongsang provinces, but it was in Seoul and the surrounding area that it gave way to its Minjoo Party rivals.

The main opposition party scored a majority in the Seoul-Gyeonggi area, which comprises almost half of the nation’s constituencies as well as the largest number of swing voters.
One of the most symbolic battles was the hard-won victory of the Minjoo Party candidate Kim Boo-kyum over former Gyeonggi Gov. Kim Moon-soo in the unwavering conservative stronghold of Daegu. The opposition Kim beat the conservative Kim 62 percent to 38 percent in exit polls. This is the first time for an opposition candidate to win in the constituency in 31 years.

Oh, with his mayoral career and steady lead in preliminary public polls, was considered a conservative blue chip in the 2017 presidential race, but his plan is now likely to falter.

The main opposition party, however, recorded an unprecedented defeat in its longtime support base Gwangju, as well as in most parts of the southwestern Jeolla provinces.

The “Honam” region heavily leaned to the fledgling minority People’s Party, which had embraced a large number of the Minjoo Party defectors currently representing their constituency there.

One standout winner in the region was Saenuri Party candidate Rep. Lee Jung-hyun, who reaped another victory in Suncheon, South Jeolla Province.

As for the People’s Party, it celebrated its anticipated victory in Honam, as well as that of its cochief Rep. Ahn Cheol-soo in his Nowon-C constituency in northeastern Seoul. The party’s Supreme Council member Kim Song-sik also resumed his former position in Gwanak-A, securing a second seat for the party within the capital.

In many of the key districts, independent candidates -- mostly defectors from leading parties -- recorded victory against party-affiliated rivals.

Of them was Rep. Yoo Seong-min in his current Daegu constituency, who won with 78.9 percent in exit polls. His landslide victory had been highly predictable due to the lack of a Saenuri Party candidate there.

Former Prime Minister Rep. Lee Hae-chan, who defected from the Minjoo Party amid nomination feuds, also confirmed his victory in the administrative city of Sejong.