Premature births on rise in Korea

According to the report released by the Health Insurance Policy Research Institute in the National Health Insurance Corporation, the number of newborns decreased in Korea from 425,786 in 2010 to 402,516 in 2014.

However, the proportion of newborns who needed critical medical attention, including premature and low birth-weight babies, increased from 3.8 percent to 4.7 percent in the same time period.

Low birth-weight babies are defined as infants weighing less than 2.5 kilograms at birth, while premature babies are those who are born 36 weeks or earlier. 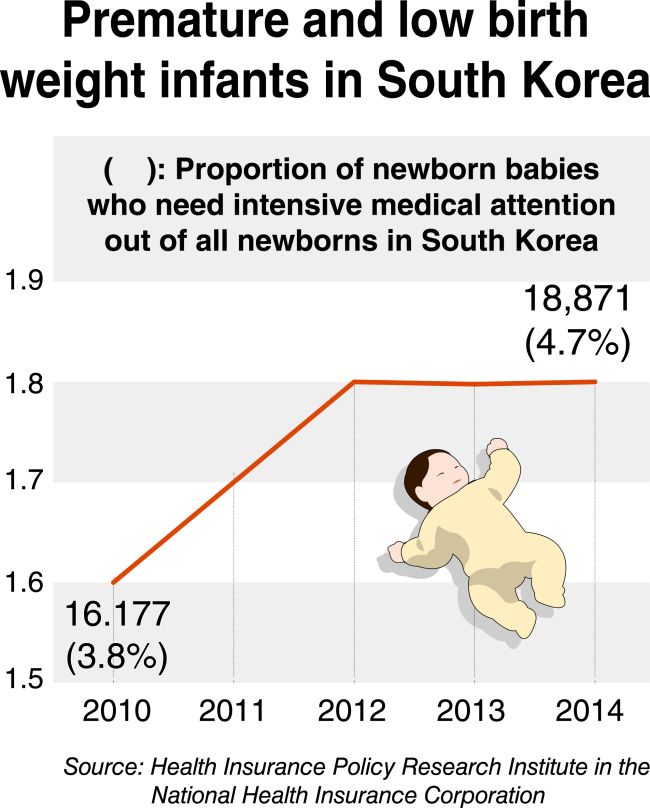 Some of the biggest causes of the increased preterm births here include more pregnancies after age 35 -- as more women are putting off marriage and childbearing -- depression during pregnancy as well as side effects of infertility treatments.

The report pointed out that the medical cost that was spent to treat premature and low birth-weight newborns accounted for 42.9 percent of the total cost spent on all newborns in the country in 2014, which was 121.4 billion won ($106 million).

According to the World Health Organization, common causes of preterm births worldwide include multiple pregnancies, infections and chronic conditions such as diabetes.

Meanwhile, a number of overseas researchers have found a relationship between depression and preterm births. In 2008, overseas research published in Human Reproduction, a European peer-reviewed scientific journal, showed depressed mothers-to-be are more likely than non-depressed women to have a preterm birth.

Another overseas study, published in 2012 in the Iranian Journal of Nursing and Midwifery Research, also found that depressed pregnant women are more vulnerable to preterm labor.

“Mental health counselors and programmers are suggested to have some educational programs about psychiatric health for midwives and the personnel who provide health care services for pregnant women,” Iranian researchers wrote in the paper.

In order to prevent preterm births, South Korean health authorities recommend all pregnant women receive mental health checkups as well as see their obstetrician at least once a week from week 36 until the delivery.

Preterm birth is among the top causes of death in infants worldwide. According to WHO, over 1 million infants die annually from premature birth complications. The agency has developed new guidelines with recommendations for improving outcomes of preterm births.

“The guidelines include interventions provided to the mother -- for example, steroid injections before birth, antibiotics when her water breaks before the onset of labor and magnesium sulfate to prevent future neurological impairment of the child,” the agency said in a statement currently available on its website.