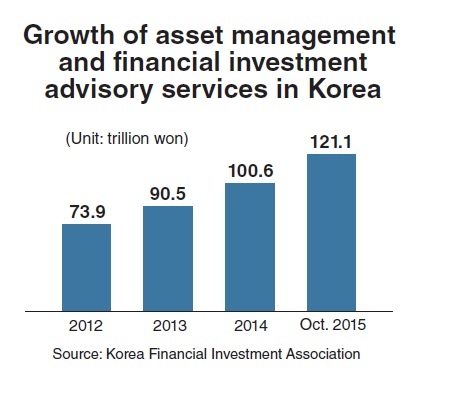 They also incur less costs for investors by using big data and computer algorithms to analyze risks and rebalance portfolios.

In Korea, these robo-advisers are required by law to accept human intervention for properly analyzing an investor’s risk tolerance or signing contracts. But in other more advanced markets such as the United States and United Kingdom, they run completely unmanned, according to industry sources.

“Our clients have shown great interest in robo-advice, and we sell about five to 10 accounts per day with a minimum asset requirement of 5-10 million won,” said Kim Jeong-beom, head of KDB Daewoo’s financial product team.

The brokerage sold a total of 1.29 billion won in asset accounts during the first 10 days since launching the robo-advisory services, according to Kim.

The investment portfolios run by artificial intelligence can vary depending on the investor’s risk tolerance, but most robo-advice products opt for low-cost exchange-traded funds, or ETFs.

“We make sure to tell our customers that robo-advice is not a magic wand to produce high returns,” Kim added.

One of the brokerage’s new products, Quarterback Alpha, selectively invests in local ETFs with an expected annual return of 7-10 percent, according to Kim. Service fees are allotted between Quarterback Investments and KDB Daewoo.

This week, Quarterback Investments and Kiwoom Asset Management plan to launch the nation’s first robo-adviser based publicly placed fund, which will be available at major banks with no minimum investment requirements

According to the Financial Services Commission, four Korean commercial banks and 10 securities companies have started or have plans to offer robo-advice this year. 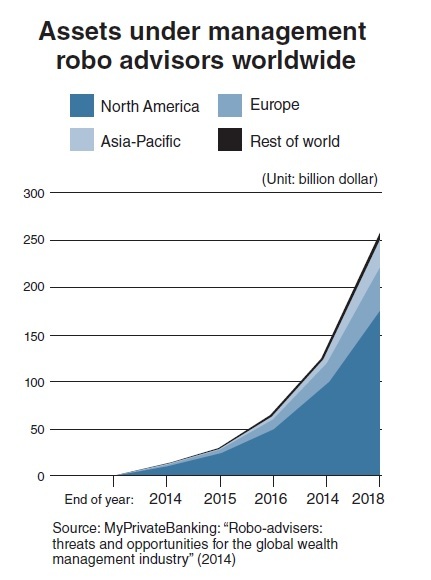 Another financial advisory services provider, Dunamu Investment Management, a subsidiary of financial technology start-up Dunamu, is also preparing to launch mobile asset management services that will be aided by robo-advice.

“The minimum account requirement will be about 500,000 won to 1 million won, and the commission fee will be surprisingly low,” Pae said.

Based on analyses of Kakao Stock users, Pae reached the conclusion that the demand for asset management among young people is bigger than expected.

“For now, our main targets will be millennials with a high level of understanding of technologies, such as the folks working at tech firms in the Pangyo area, such as Kakao and Naver,” Pae said.

Regulations to be phased out

Regulations for intelligence-based investment machines will be eased as the market matures.

The government plans to test beta services for fully automated services from July, while closely monitoring the automated programs.

“Market players say their technologies are fully ready to go directly to the last stage. They hope the government could accelerate deregulation moves,” Hwang Young-key, chairman of the Korea Financial Investment Association, told reporters in March after meeting with officials of robo-advisory companies.

However, the use of robo-advisers will also raise concerns over service providers’ profitability on low fees, noted Kwon Woo-young, a researcher at the Woori Finance Research Institute, in a report.

He also warned that intelligence, big data-based trading has not been fully verified as to whether it can properly react to unexpected events, because they have mostly been developed during the asset market boom following the 2008 financial crisis.