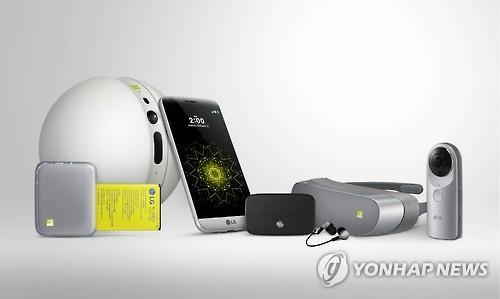 The LG G5, which just went on sales on Thursday, saw its first-day sales reach 15,000 units here, hovering far above its predecessor, which managed to sell only around 5,000 units.


Another industry source said the figure could be higher considering that KT Corp., the country's No. 2 mobile carrier, suffered a network failure on Thursday, which delayed the purchase of between 1,000 to 2,000 users.

Industry watchers expect the combined global sales of the G5 to reach 10 million units, which will be equal to the G3 released in 2014.

The South Korean tech giant said the G5 will come with a price tag of 836,000 won (US$729) in the country, slightly higher than the $707 of its predecessor, although the price is lower when considering discounts from mobile carriers.

The initial price stood equal to Samsung Electronics Co.'s Galaxy S7, a move seen by many as LG's confidence over the flagship smartphone.

The G5 smartphone, first introduced at the Mobile World Congress in Spain last month, is touted as the industry's first "Modular Type" smartphone, which connects with various accessories.

Following the strong performance, sources said LG began a 24-hour production at its facilities to meet the rising demand.

The robust sales on the first day may signal a recovery of its ailing smartphone businesses, industry watchers added.