South Korea's youth jobless rate surged to an all-time high of 12.5 percent in February, a government report said Wednesday, underlying the growing number of college graduates failing to land jobs due to the sluggish economy.

Statistics Korea said the nation's overall jobless rate stood at a six-year high of 4.9 percent last month, up from 3.7 percent in January. The February reading also marks a 0.4 percentage point rise from the year before, the agency said in its monthly job market report. 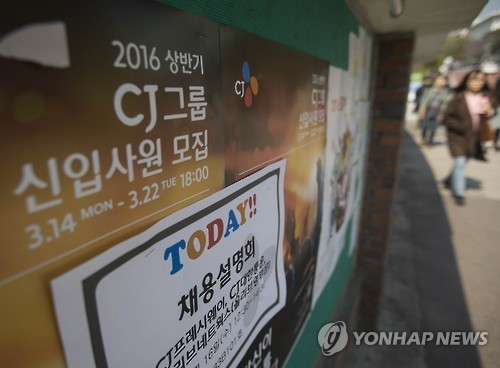 The agency noted that a total of 560,000 people aged between 15 and 29 remained out of work last month, pushing up their unemployment rate to a record high of 12.5 percent, up sharply from 9.5 percent tallied a month earlier.

The February figure for the young people group represents the highest monthly tally since the agency started compiling related data in 1999.

The number of employed people reached 25.41 million last month, with 223,000 new jobs being created compared with the year before, the report showed. The February job growth was the lowest in 12 months.

Statistics Korea said the record-high youth unemployment rate came as a great number of college seniors flooded into the job market upon graduation in February, with increasing part-time job seekers also included in the jobless rate.

"We see the increase in the government exam applicants as a factor pushing up the youth jobless rate by 0.5 percentage point,"said the Statistics Korea official.

He also explained that the cold weather and the Lunar New Year's holidays prevented the agriculture and fishery sectors from hiring more people, which lead to a rise in the entire unemployment rate.

South Korea's outbound shipments, the key economic driver of the export-oriented country, have been on a sharp decline in the last three months, extending its losing streak to a record 14 months in February.

Industrial output, as a result, fell 1.2 percent on-month in January, with their facility operation rate dropping to 72.6 percent.

"As industrial production has remained in the doldrums, young people are struggling in the tight job market," said an official from the Ministry of Strategy and Finance. "We expect exports to make some improvement in March and do better in the second quarter.

So the employment-related figures will pick up." (Yonhap)