Concerns are mounting over the South Korean economy, which has already been dented by the global economic slowdown and falling oil prices, as it faces increasing geopolitical tensions over North Korea’s missile tests.

Most experts are offering a pessimistic outlook, saying the local economy would be stifled by greater uncertainty in a Cold War-like situation with Seoul and Washington taking bolder actions against Pyongyang, despite protests by Beijing and Moscow.

Market reactions to the ongoing inter-Korean tensions could be considerable, unlike previous events which had only limited impacts.

“The situation is different from before. Uncertainties over the South Korean market are bound to grow,” said Jeong Dae-hee, a researcher in the division of macroeconomy at the Korea Development Institute. 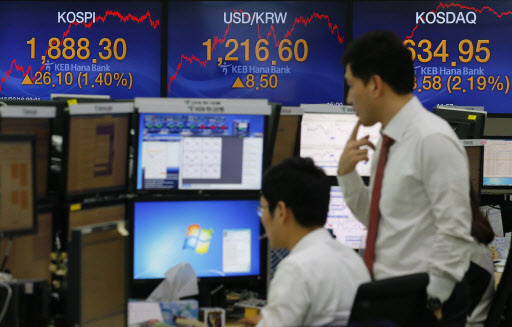 The South Korean market had quickly rebounded from previous North Korean nuclear tests, with its impact on the currency and stock market lasting only a few days.

But after Pyongyang’s latest missile launch and Seoul’s shutdown of a joint industrial park in Gaesong, the financial indices fell further down, signaling that Asia’s fourth-largest economy could be more vulnerable to the North Korea risk than before.

KOSDAQ fell more than 6 percent last Friday, triggering a circuit breaker to suspend its operation for 20 minutes for the first time since Aug. 9, 2011. The country’s credit default risk also surged, reflecting deterioration in the credit of government, and corporate bonds.

Countering negative prospects, Finance Minister Yoo Il-ho said Friday that the shutdown of Gaeseong Industrial Complex would have little impact on the economy.

“The production from Gaeseong accounted for 0.04 percent of the total gross domestic product,” Yoo told lawmakers.

Earlier this week, Moody’s left South Korea’s rating unchanged, but mentioned that the closure of the industrial park will be “credit negative” for the country due to the heightened geopolitical risks.

However, with the international community gearing up for concerted efforts to impose expanded sanctions on North Korea for an indefinite period, South Korea could lose interest from foreign investors concerned about the increasing market volatility, experts say.

“Concerns on how the economy would react to those rare decisions by the government could hold back investment plans of companies and foreign investors,” Jeong said.

There is also market speculation that South Korea could face possible economic retaliation from China, its biggest trading partner, for initiating talks on deploying a U.S. missile defense system on its soil.

Beijing has lodged complaints against Seoul’s announcement of formal talks with the U.S. on the stationing of a battery of the Terminal High Altitude Area Defense system on the peninsula.

Some raised concerns that China could impose trade barriers against South Korea in a clear retaliation, such as limiting overseas trips to Seoul and other cities and strengthening regulations on Korean companies doing business in China.

Inspection of imported food products from Korea could be tightened, and Seoul’s role in the Beijing-led Asian Infrastructure Investment Bank could also be limited.