Over Lunar New Year, Seollal, there are some traditional foods that herald in the festivities. One of them is Tteokguk, or rice cake soup. It is the first meal one should eat in the new year, as it represents hope and is symbolic of another year lived, or as it is properly known here, the Korean age of reckoning. After finishing the bowl of soup, a person’s age goes up by a year.

Manduguk, or dumpling soup, is a North Korean variation of the traditional soup eaten during Seollal, and often both this dish and rice cake soup can be enjoyed together. This is called tteokmanduguk.

In search of specialty places around Seoul, we visited Mandu Jip in Gangnam where Pyongyang mandu has been made for more than 34 years. The restaurant was founded by Han Dong-suk who escaped the North during the Korean War with her husband Ok Jung-bin, who was then famous soccer player. Their friends urged them to open a store and so Han opened a small shop in Apgujeong-dong in Gangnam-gu where it is still located today. It is currently owned by the couple’s daughter Ok Hye-kyung.
What makes Mandu Jip’s Pyongyang-style manduguk so beloved is the purity of its ingredients and the handcrafted care that goes into each and every mandu. Hanwoo beef from a specialty butcher and vegetables from Nonghyup Hanaro Mart are blended with seasonings to make the meat filling superior in taste. It is what is believed to make the shop stand out from others.
The wrapper dough, which is thick but soft and chewy, is kneaded many times and left overnight to rest. This creates an airy texture. A beautifully light and watery beef brisket broth, like that found in naengmyeon, is cleared of fat and a small dollop of house-made dadaegi red pepper paste is added at the bottom of each soup bowl to provide a tangy accent.

Mandu Jip makes 1,500 mandu per day but during Seollal many customers buy their premade uncooked mandu with broth in advance. They sell over 5,000 mandu per day during the holiday season.

Located across the street from the Galleria Department Store, this hidden gem is nestled among dodgy store fronts. Find the simple flower stand on Apgujeong-ro to pinpoint the location of the restaurant. You will know you have found something special once you enter the restaurant, which is dimly lit with clean interiors of blond wood and white walls decorated with a tasteful art collection. The crowd is well-heeled and fashionable in their winter Brunello Cucinelli coats and Saint Laurent bags, which affirms that simple well-made food has no demographic boundary and that jumping over muddy puddles is well worth every bite.

To a delicious New Year! 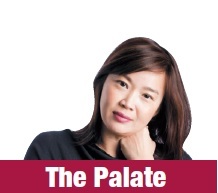