The Korean art world has been engulfed in a scandal involving rumors and suspicions surrounding allegedly forged works of Lee U-fan, a leading Korean artist on the international art scene. A forged certificate for his famous “From Point” series painting -- sold for $415,600 at a local art auction in December -- has shaken the Korean art community, spreading mistrust and suspicion in a world where reputation matters a great deal.

As the National Forensic Service hasn’t confirmed the authenticity of the painting yet, speculation is mounting that the painting may have indeed been forged and that there could be more fake works that have been clandestinely distributed in the Korean art market.

In December 2015, the Seoul Metropolitan Police Agency booked without detention two owners of galleries suspected of circulating alleged counterfeits of Lee’s paintings and seized six works of art for appraisal by the National Forensic Service. The results have not yet been released.

“We just have to wait and see until the police announce the results. Too many rumors have been circulating, spreading mistrust in the market,” said Seo Seong-rok, president of the Korean Art Appraisal Association and art critic.

Artist Lee, who had previously insisted that it would be very difficult to duplicate his works, admitted through a statement released by his lawyer Monday that forged works of his paintings are being circulated and pledged to fully cooperate with the ongoing police investigation.

“As the police investigation drags on, the reputation of the artist and his works have been greatly damaged leading to a violation of his copyright and privacy,” the statement noted.

Seo said he gave the police his opinion on the authenticity and quality of the seized paintings, but declined to elaborate.

Art forgery has been a persistent problem in Korean art circles. Works of the most sought-after artists in the market, including modern masters such as Lee Jung-seob, Park Soo-keun, Chun Kyung-ja and Kim Whan-ki, have been frequent targets of forgery. 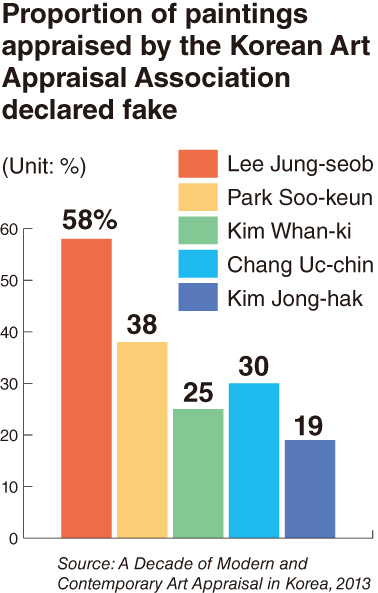 Korea saw a two-year-long process to determine the authenticity of Park Soo-keun’s “The Washing Place,” sold at an auction in 2007 for the highest price bid on a Korean work of art at the time.

In 2013, the court ruled some 2,000 paintings of Lee Jung-seob and Park Soo-keun to be forgeries, including Lee Jung-seob’s popular sketch “Fish and a Kid.”

The controversy over artist Chun Kyung-ja’s “Beautiful Woman,” which the artist claimed to be fake, emerged once again when her family requested the National Museum of Modern and Contemporary Art, Korea, to dispose of the painting -- in its possession -- after her death in August 2015.

According to data from “A Decade of Modern and Contemporary Art Appraisal in Korea,” released by the KAAA in 2013, the Korean art scene has seen an increase in the number of forged artwork, along with the growth of its art market. The year 2007, a relatively good year for the Korean art market, saw the largest number of forged works at 249 pieces, according to the Korean Art Appraisal Board, which conducts valuation and appraisal upon request. The number was more than double the 100 forged pieces in 2006 and went down again to 130 pieces in 2008.

Lee U-fan is a relatively new target of art forgery, as his works are increasingly favored by global art buyers amid the popularity of Korean monochrome painting, dansaekhwa. The Korean police quietly launched an investigation into his alleged fake works in 2013 -- which coincided with the growing popularity of his works in the international art scene following his retrospective at the Guggenheim Museum in New York in 2011. Last month‘s police booking of two gallery owners is part of that ongoing investigation.

Forgers create fake works in order to take advantage of the price surge of artworks. In Korea, art has long been considered as investment, or a means of money laundering.

The distribution of forged works also highlights a conflict of interest in the Galleries Association of Korea’s issuance of certificates of authenticity as well as conducting of appraisals. The organization was charged with confirming the authenticity of artworks until 2003.

However, as the GAK represents commercial galleries in Korea, its handling of art appraisal has long been the subject of criticism.
Many art forgery scandals point to the need for transparent, scientific and systemized process of ordering, cataloging and archiving works by popular artists. Experts have called for the publication of catalogue raisonne, a comprehensive and thorough listing of all artworks made by an artist.

The Gerhard Richter Archive is a public institute in Dresden, Germany to document all his works. Funded by the State of Saxony and private sources, it is authorized by Richter to issue certificates of authenticity for the artist’s works.

The archive has published six volumes of Gerhard Richter’s catalogue raisonne, a lengthy project that started in 2003. The project is expected to end in 2021, according to Elger. The first volume of Richter’s catalogue raisonne was published in 1986, covering works produced from 1962 to 1968, including his iconic paintings “Tiger” and “Motor Boat.”

In Korea, there are only two catalogue raisonnes: One is of the late Kim Ki-chang and the other of the late Chang Uc-chin.

It was just last November that the KAAA launched a project to compile catalogue raisonne of the two great modern masters of Korean art, Lee Jung-seob and Park Soo-keun, as part of the Ministry of Culture, Sports and Tourism’s project to strengthen art data base and appraisal system in Korea. The KAAA is a nonprofit institution, which collects and researches important source materials for building databases of Korean artists, educates art appraisal experts and works as an adviser to the Korean Art Appraisal Board for their valuation and appraisal works.

Just as there are independent committees in charge of research, archiving or managing estates of art masters in the West, it might be necessary to consider establishing such institutions for some of the most representative Korean artists.

“Lee U-fan is alive. He should be given the choice of who issues the certificates of authenticity. He can form a committee of people who know his art very well. If rumors continue to spread, it could be bad for his career,” said Gilles Dyan, chairman of Opera Gallery.