South Korean tech giant LG Electronics Inc. said Tuesday its net loss narrowed in the fourth quarter from a year earlier on strong sales of premium TVs and home appliances, despite a poor performance from its smartphone business.

Net loss came to 140.4 billion won ($117 million) in the October-December period, compared with a deficit of 205.6 billion won during the same period in 2014, LG Electronics said in a regulatory filing. 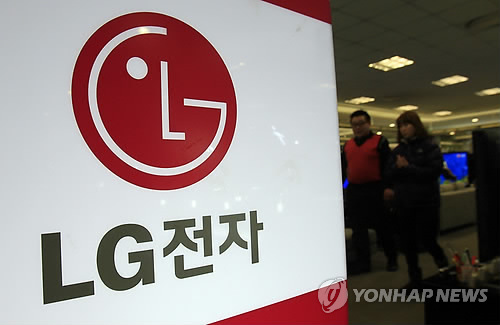 The net profit for 2015 hovered far below the market's earlier estimate. Local brokerage houses expected a net profit of 525.4 billion won, according to data compiled by Yonhap Infomax, the financial arm of Yonhap News Agency.

By sector, the home entertainment business posted an operating profit of 109.2 billion won in the fourth quarter, rising sharply from 2.1 billion won posted a year earlier on the back of the improved sales of high-end models.

The mobile business posted sales of 3.7 trillion won, down 0.4 percent on-year. The figure, however, managed to climb 12 percent on-quarter on the back of improved sales in the North American market, led by the V10 smartphone.

The home appliances and air solution division posted an operating profit of 214.8 billion won, doubling from 92.2 billion won posted a year earlier on the back of the improved sales of premium products.

The vehicle component business posted an operating profit of 9.7 billion won, marking the first time it boasted a quarterly profit.

The company, however, said it will take two or three more years for the vehicle component business to post steady profits.

For 2016, LG Electronics said it expects the market demand for premium TVs, including Ultra HD TVs, will continue to rise, so it will continue to improve profitability by focusing on its high-end products like organic light-emitting diode TVs.

The company added the tech industry will experience tougher competition in the budget smartphone segment, adding it will make efforts to roll out various low-end models with improved design to take a larger slice of the market. It also plans to beef up the promotion of flagship products as well, including the V10 released last year.

LG also said earlier this month it will showcase its next flagship smartphone, presumably the G5, just before the Mobile World Congress in Barcelona this February, taking on Samsung Electronics Co.'s Galaxy S7, which is also likely to debut there.

While LG declined to comment on details of the new flagship model, the company said the production cost is expected to increase in line with improved features, but it will try to maintain the price from its predecessor by cutting costs in other areas.

Concerning the home appliances business, LG said the arm is set to post steady growth, although the political unrest in the Middle East and the slowing Chinese economy will remain potential risks.

LG added it will promote high-end built-in brands to bolster the segment's profitability.

Shares of LG Electronics closed at 54,800 won, down 3.52 percent from the previous session, when the benchmark KOSPI lost 1.15 percent. The fourth-quarter result was released after the market closed. (Yonhap)