But it is more than a computer error for a number of artists, who are exploring these gremlins as “glitch art,” and expat Mathieu St-Pierre wants to introduce viewers to the concept through his exhibition “100dpi.”

Showing large images ― printed at 100 dots per inch to break conventions not only in video but also in print ― the exhibition features a variety of abstract work.

St-Pierre studied fine art at university, but his work on glitch art came later. He said he was not satisfied with his undergraduate work and took a break from art after graduation.

“After coming to Korea back in 2006, I had more free time and did some research about experimental videos. That’s when I came across Takeshi Murata’s ‘datamosh’ technique and his work ‘Pink Dot,’” he said.

“Then, I started experimenting by breaking things by using programs for applications that weren’t meant to be operated by them etc. A few years later, that led me to the creation of the Facebook group Glitch Artists Collective, which has now over 29,000 members.”

His work has since been featured in the Guardian, as well as several other media. 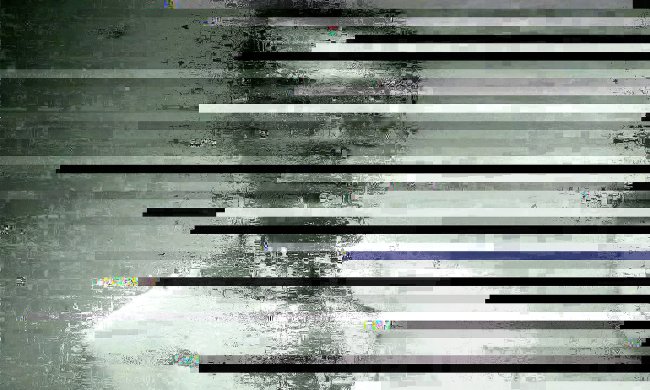 "Past Forward" by Mathieu St-Pierre
St-Pierre generates his images from short videos, using the clips to generate large numbers of images. Then he carefully selects the ones he feels can tell an interesting story.

“This process can also be very tedious and frustrating. Sometimes I can work several hours without getting a single good image,” he said. “So, it’s all about trial and error.”

The images on display in “100 dpi” are in various states of distortion. A series of portrait-like images begins with pixelated interference erasing the details of a man and his identity and end in fuzzy blurs barely recognizable as a figure. Others are completely abstract, in vibrant colors.

St-Pierre said his main focus in his art was on appearance, rather than an underlying message.

“I usually go for colors and composition,” he said. “I do not really look for any topic but if I do, I try to have a critical point of view toward society and media, pointing out the perversions of the Internet.”

The exhibition runs Monday to Saturday until Jan. 3 at Gahoedong 60 gallery in the Bukchon area of Seoul.

For directions, visit www.gahoedong60.com, and for more on St-Pierre’s work, visit www.mathieustpierre.com.