Jang Ha-sung, who is widely known in the fields of corporate governance and shareholder activism, tackles one of the most urgent problems rising in Korea – inequality. 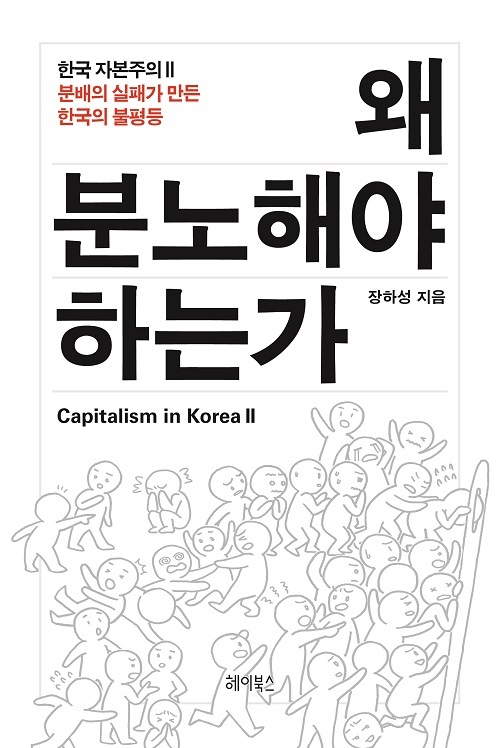 The Korean economy, which rose from rags to riches at a remarkable pace, now faces the fallout from the quick rise where the rich are getting richer and the poor are getting poorer as the country’s fully adopts capitalism.

The root of the problem is the widening income gap between employees, who mostly rely on monthly salaries for livelihood, and employers who are often family-run conglomerates or chaebol unwilling to follow the basic principles of wealth redistribution.

Through empirical statistical data, Jang tells a reasonable story of why average Koreans, especially the young, are getting and should get angrier. As Korea becomes an angry society with the economy growing without creating jobs, the problem of income inequality will worsen unless it corrects the defective capitalist system with sound policies.

Another interesting point is that most of Korea’s wealth of the rich are “inherited wealth,” while wealth in the U.S. is mostly created by venture entrepreneurs. This is further worsening the problem in Korea as the system is creating less and less opportunities for the young.

“Why We Should Be Angry” is the second book in Jang’s “Capitalism in Korea” series dissecting the country’s political and socioeconomic landscapes. Jang is a professor of finance at Korea University’s Business School. He is known for creating the Jang Ha-sung Fund with the twin goals of protecting minority shareholders and demanding companies it has invested in to improve their corporate governance and business transparency.
(hkp@heraldcorp.com)