By Yoon Min-sik
Published : Dec 8, 2015 - 19:34       Updated : Dec 8, 2015 - 19:37
The South Korean government has been striving to curb violence in various corners of society, including at schools, homes, workplaces and online. The Korea Herald is publishing a series of articles delving into the reality and the country’s efforts to restrain the violence. This is the first installment. ― Ed. 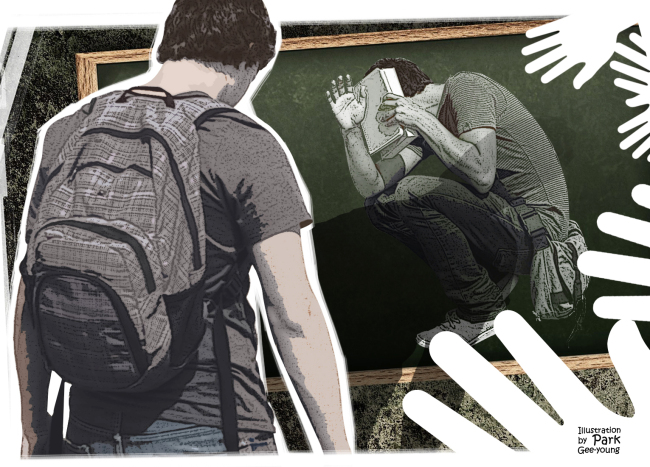 With technological development, the earlier constraints of time and space have slowly vanished as social networking enables people from across the world to instantly communicate online whenever they want.

But cyberspace is also transforming the face of teenage violence. Not only do authorities and parents have to protect the children from traditional dark-alley predators, but they must also cope with new types of online bullying.

Cyberbullying can come in various forms, but among the most widespread is through social media. And often times, the trigger can be something very mundane.

Friends turned into tormentors for an 11-year-old girl over a character “Olaf” from the popular Disney movie “Frozen.” When she posted a drawing of the character online, one of her friends jokingly said that she “insulted” Olaf, and thus began the bullying.

Likening her to a breed of dog, her classmates wrote subtle postings about her being ugly and having no friends. Whenever she tried talking to them, she would only get giggles in response instead of an answer.

The case, recently uncovered by the Prevention of Youth Violence Foundation, marks the severity of cyberbullying that often goes undetected.

Sometimes even students themselves fail to realize that they are a victim or perpetrator of teenage violence.

Save the Children Korea, the local branch of the international independent organization for children, held an open debate late October with students on what should be considered as school violence.

A discussion over the school “tradition” of posting ugly-looking photos of a person on his or her birthday ensued, as opinions were split over whether it was merely a practical joke or something that could leave an emotional scar.

“Having someone talk behind their backs online is something that all teenagers are familiar with, but it is not often that they regard it as cyberbullying. They know what cyberbullying means, but fail to realize that they ― or their friends ― are being subject to it,” an official from Save the Children Korea said.

Because of the characteristics of social media, which links people online round-the-clock, the bullying can go on for an extended period of time. One such case is newly coined word “Kakao prison,” which refers to the instance where multiple people invite unsuspecting victims to a group chat room on the popular mobile messenger KakaoTalk just to insult them.

“Kids who invite the victim throw insults and make demands en masse. The victims can just exit the room, but they are invited back as soon as they get out. When they return, they are treated even more harshly,” said a high school student surnamed Lee who said he has witnessed the cited bullying in process.

Some KakaoTalk chat rooms sometimes host much more sinister deeds that victimize children. Last Month, a Seoul court sentenced a 21-year-old surnamed Kim and a 20-year-old woman to seven- and five-year prison terms, respectively, for running a prostitution “runaway fam (family),” which refers to a group of teenage runaways living and working together.

The “fam” worked as an illegal ring coercing the homeless teens to work as prostitutes through violence and threats. One of the more common ways of “recruitment” is via mobile messages.

The constant exposure to abuse can bring negative repercussions on the mental state of children, according to Lee Sang-kyu, a psychiatrist from Hallym University Medical Center in Gangwon Province.

“The problem with cyberbullying is twofold. One is that it allows a slew of different methods of bullying, and also it can be done 24 hours a day,” said Lee, who specializes in adolescent mental health, depression and addiction.

“In the past, bullying was confined largely to schools. But nowadays, students can receive text messages while they are sleeping, and an embarrassing photo might show up without any warning. The psychological damage from cyberbullying can actually be larger (than face-to-face abuse).”

Eradicating teen violence is a major goal of the Park Geun-hye administration, as it is one of four “social evils” the president vowed to root out while taking office: sexual violence, school violence, domestic abuse and violence and substandard food.

The Ministry of Gender Equality and Family has formulated policies to counter teen violence. One of them is “tailored countermeasures against violence in elementary schools,” in cooperation with the Education Ministry and Welfare Ministry.

The plan, which rolled out in August, encompasses psychotherapeutic and environmental analysis of what causes school violence, while providing counseling therapy.

Reports indicate that cyberbullying is a rising problem in Korean schools.

According to Rep. Jeong Jin-hoo of the minor Justice Party, the number of school violence cases deliberated by authorities last year marked 19,521, an increase of about 10 percent from 17,749 the year before. Cyberbullying surged nearly 20 percent to mark 1,283 during the same period, and was the third most frequent type of student abuse in the country.

“Although offline bullying has decreased, online bullying, verbal abuse and violence have increased. ... The Education Ministry should conduct a thorough investigation on its countermeasures against school violence,” he said.

But Jeong’s numbers are open to other interpretations, the Education Ministry said. A ministry survey announced last week showed that 34,000 students replied that they were abused in school, marking a decrease from 48,000 last year. It also marked a notable decrease in all major categories, including cyberbullying.

“We believe it is due to our (the ministry’s) comprehensive policy on dealing with school violence,” said Jung Si-yung, the director of school life and culture division at the ministry. He said the reason the numbers cited by Rep. Jeong have surged is because the ministry’s campaign has raised awareness about the issue, and the authorities are now mindful of violence cases that would have gone unnoticed in the past.

Jung said the ministry has strenghtened the infrastructure against bullying ― 35.8 percent of schools in the country now have CCTVs as opposed to 25.5 percent in 2014 ― and policies like a student peer counseling system to raise awareness.

The peer counseling system is another policy by the Gender Equality Ministry and the Education Ministry to tackle school violence. It allows the victims to consult fellow students about their problems. Last year, 104,650 teen counselors worked in 6,396 schools across the country.

An evaluation of 490 teen counselors from 51 schools showed that the system not only helps the victims of school violence, but it also enhances communication skills, leadership and the empathy for students giving advice.

According to experts, the ability to sympathize ― or lack thereof ― is a crucial factor in understanding the fundamental cause of teen bullying.

A teen’s ability to sympathize was one of the three main factors ― along with the ability to control the situation and sense of self-efficiency ― that influence their participation in bullying on mobile messenger services, according to “A report on teenagers’ motivation for cyberbullying and control factors” by the Korea Information Society Development Institute.

In addition, Lee of the HUMC pointed out impulsive behavior ― which can be fueled by stress ― and superficial relationships of many of today’s teens as the main culprits for bullying.

“Teenagers’ frontal lobe ― closely linked to planning and prediction ― is not fully developed, which means they are prone to act impulsively without thinking. Stress and environment can accelerate such behavior,” he said.

Lee said the hunger for immediate satisfaction ― which can be sparked by excessive use of smartphones and the Internet ― hinder a student’s capability to make an emotional connection with others, raising the possibility that modern conveniences may ironically be eating away at children’s well-being.

“Children seeking immediate satisfaction feel constant emotional hunger. Although they may look well acquainted, their relationships and bonds they share are shallow, and even the slightest crack can jeopardize them,” he said.

“Bullying a member of a group and making that person a scapegoat temporarily strengthens a bond within that group. They think ‘that one person’ is the problem, not the group.”