[SUPER RICH] The leadership and riches of Hyundai’s third generation

The Hyundai family was once again in the spotlight on Nov. 25, on what would have been the 100th birthday of late founder Chung Ju-yung.

Tycoon Chung founded the first company of what would become Hyundai Group in 1946, starting off in the construction sector and then expanding to automobiles, steel, shipping and more, setting the foundation for Korea’s rise as an industrial powerhouse.

A recent public survey selected him as the most respected Korean entrepreneur, and Chung’s children have also helped raise Hyundai into a world-class corporation following in his footsteps.

Now, the interest has naturally shifted to the next generation of the Hyundai family and the future of the conglomerate. With a history of nearly 70 years, there is speculation that the group is preparing itself for corporate successions as the third-generation members have increased their stakes and are spearheading major projects.

The Superrich Team analyzed several third-generation Hyundai family members regarding their wealth and academics, as well as how many have inherited their grandfather’s entrepreneurial spirit. 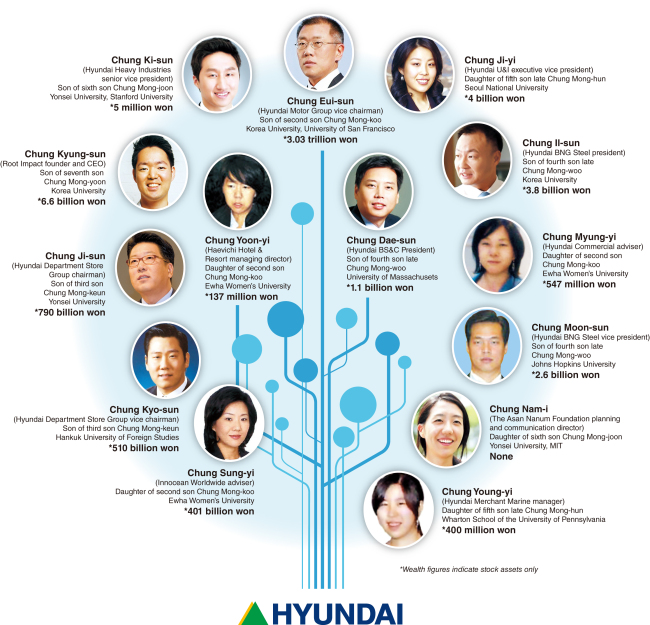 The second generation of the Hyundai family have coexisted as the pan-Hyundai empire split into multiple groups -- Hyundai Motor Group, Hyundai Department Store Group, Hyundai Heavy Industry Group and more -- after going through a fraternal feud dubbed as the “strife of princes.”

The third generation family members received most of their wealth from their fathers and are in the top of the superrich rankings, especially those in the motor group and the department store group.

Chung Mong-koo’s eldest daughter Chung Sung-yi is one of the few grandchildren who has higher assets. She, works as an adviser at affiliated advertising firm Innocean Worldwide, and is estimated to have 401 billion won in stocks. She entered the business world rather late, having been a housewife for 20 years, but after getting Innocean listed on the main bourse in July -- 10 years after its founding -- she saw her assets rise precipitously.

The third generation of the family has produced a good number of academics. Out of 15 people whose university credentials are publicly known, 12 studied at top Korean universities, among which eight are from the top three -- Seoul National University, Yonsei University and Korea University.

Some went on to obtain additional graduate degrees overseas. Chung Eui-sun received an MBA from the University of San Francisco, Chung Ki-sun an MBA from Stanford University and Chung Nam-i a Master of Business at MIT.

The management and leadership abilities of the third generation have also been scrutinized by the public.

Hyundai Motor Group vice chairman Chung Eui-sun, heir to his father, has been considered a “model student” in management as he improved Kia Motors’ business performance, established a foundation for “Design Kia” and recently released the group’s Genesis luxury brand.

Chung Eui-sun is said to have led the Genesis luxury brand himself, a slight difference from his father who focused on the Hyundai Equus and the Kia K9.

However, he has the pressure of making the brand succeed, as well as resolving issues with the labor union and the “anti-Hyundai” sentiment, stemming from its alleged lackluster quality of domestic cars compared the ones made for foreign export.

However, the company’s outlet business is at a disadvantage as it started operations later than its competitors, and its online business is still struggling.

Hyundai Heavy Industries senior vice president Chung Ki-sun had been in charge of major projects, such as signing an agreement with Saudi Arabian oil company Saudi Aramco, signaling its transition from a manager-based business to an owner-based one since 1991.

However, Hyundai Heavy Industries saw a loss of 3.2 trillion won last year, and has continued to see quarterly deficits this year.

Although the third generation of family members are pursuing different business, they share the burden of having to prove their grandfather’s entrepreneurial spirit.

The late Chung Ju-yung used to say, “Whenever I started something, I had 90 percent conviction and 10 percent confidence that I can and would succeed. I did not even have 1 percent of doubt that I would fail.” It is advice his grandchildren could learn to take.