By Korea Herald
Published : Nov 10, 2015 - 18:12       Updated : Nov 10, 2015 - 22:39
The South Korean government said Tuesday it plans to build a second airport on the country’s southern resort island of Jejudo to accommodate the soaring air traffic to the global tourism destination.

The new one-runway airport is slated to open by 2025 with estimated construction costs of 4.1 trillion won ($3.54 billion). 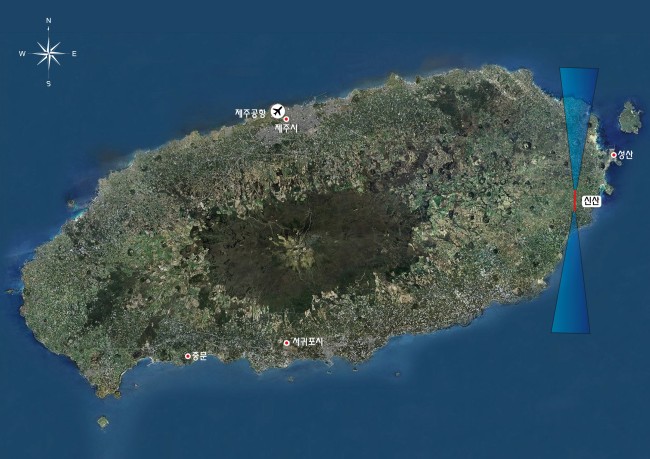 The airport will be located in Sinsan, on the eastern side of the island between the cities of Seogwipo and Seongsan, according to the Ministry of Land, Infrastructure and Transport.

“Urgent expansion of airport infrastructure is needed as air traffic to Jejudo Island has sharply surged due to a growing demand for low-cost carrier flights and an influx of Chinese tourists,” said Seo Hoon-teak, director of the ministry’s Aviation Policy Bureau.

The 4.95-square-kilometer airport, to be bigger than Jeju International Airport, will have a runway 3,200 meters long and 60 meters wide.

Opened in 1968, Jeju International Airport has served as the only aerial gateway to the island, but studies showed that its runways will be completely saturated by 2018 with the explosive growth rate in flights.

The ministry’s research forecast that the number of Jeju International Airport users will stand at 28 million in 2018 and rise to 40 million by 2025.

“After carrying out preliminary feasibility studies, we decided that Sinsan was a suitable location for the new airport by taking into account the cost, impact on the environment and public opinion,” the official said.

Previously, the government had mulled three options to expand capacities of airport infrastructure on Jejudo Island: expanding the existing airport, closing down Jeju International and building a completely new airport with two runways, or building a second airport at a separate location.

“Expanding the existing airport would incur excessive construction costs as high as 9.4 trillion won and pose bigger environmental risks as it needs to reclaim land from the sea, while closing it down entirely is opposed by residents,” the ministry said.

Construction work is expected to begin in 2018 after further feasibility studies by the ministry and detailed plans, such as for the terminal size and land compensation.