The show, by Heezy Yang, will include watercolors that echo traditional Korean style but depict homosexual couples, satirizing the claims of conservatives here, who have opposed gay events and gay rights in Korea, calling homosexuality a Western idea. 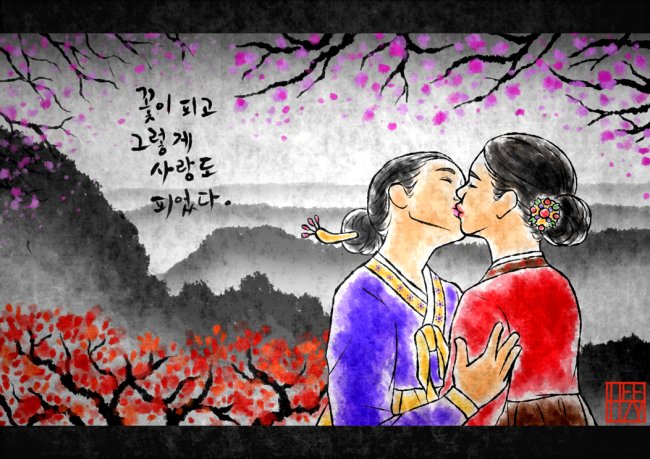 “There are still a lot of people in Korea who think that there are no gays in Korea or who don’t have a good idea of what gay means. But there have always been gays in Korea,” he said. “They love like everybody else and want the same rights.”

Other images use a more modern graphic style to talk about not just homosexual issues but those of the education system and online censorship.

Yang says he doesn’t belong to an organization but he has fund-raised for a support center for LGBT youths here, and also held an “Unjustifiable” performance art piece in public spaces to raise awareness of the issue.

In the performance he sat with stuffed animals representing abandoned pets, with written explanations for their rejection, such as “Because they have a baby now.” He sits in his own box, with the explanation “Because I’m gay.”

“Some people are kicked out of their homes because they are gay and their parents cannot accept that,” he said.

“I thought what I could do besides donating and I decided to raise awareness. I acted as a homeless gay youth who had been kicked out of home.”

The exhibition is held at Moloko Plus on the street opposite Sin Bin in Itaewon, colloquially known as Homo Hill. Opening hours are Thursday-Sunday from 9 p.m. For more information, visit www.heezyyang.com/.