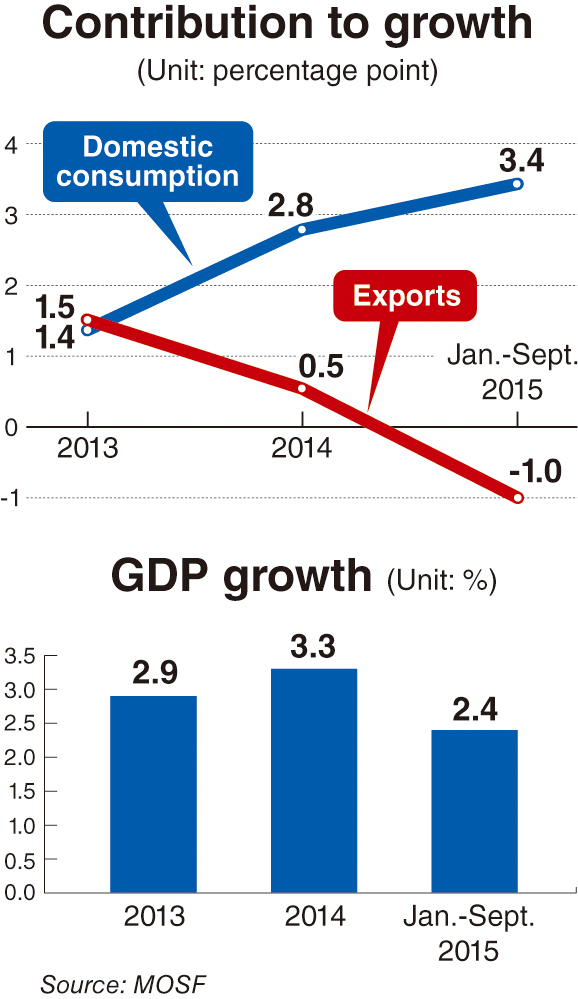 Korea’s exports decreased by 6.6 percent from a year earlier in the first nine months of this year. This downward trend is expected to continue in the months, or years, to come with Korea’s manufacturing exporters facing a set of unfavorable external conditions.

Officials at the Ministry of Strategy and Finance have been buoyed by recent data showing Korea’s gross domestic product expanded by 1.2 percent from the previous quarter in the July-September period, the highest rate since it peaked at 1.7 percent in the second quarter of 2010. The steepest quarterly growth in five years was attributed mainly to measures taken by the government to boost domestic demand, including earmarking 11 trillion won ($9.7 billion) for an extra budget.

MOSF officials expect the growth trend to be kept in the fourth quarter on the back of efforts to further boost domestic spending. But they are not confident that the growth rate will reach this year’s target set at 3.1 percent.

Lee Chan-woo, director general of the economic policy bureau at the ministry, said the 2015 growth could have been close to 4 percent unless overseas shipment contracted.

Economists here note Korea’s growth will continue to remain in the 2-percent range next year if exports fail to rebound.

Data from the Finance Ministry show contributions by domestic consumption and exports to the country’s economic growth having continued to increase and shrink, respectively, in recent years.

Given these contrasting trends, economic policymakers may well tilt toward bolstering local expenditure to shore up the growth of Asia’s fourth-largest economy. It is certainly harder for them to find ways to boost its exports as global trade remains sluggish partly due to China’s slowdown. Tumbling oil prices and a rise in the value of the Korean currency are further worsening conditions for the country’s exporters. With imports decreasing at a faster pace than exports, Korea’s trade volume is expected to fall short of $1 trillion this year, a landmark figure the nation has achieved since 2011.

Experts indicate, however, Korea should continue to make strenuous efforts to increase exports, saying there will be a limit to boosting growth only by expanding domestic expenditure, given the size of its economy.

The country needs to develop new innovative products to replace items that have led its exports over the past decades. There has been no change in the list of its 13 major export items since 2006. Overseas shipment of those key products -- including smartphones, home appliances, steel and automobiles -- have shrunk by 8.1 percent so far this year, exceeding the overall export decrease rate of 6.6 percent.

What has made Korean exports less competitive is that a succession of administrations have chosen different fields as new growth engines.

“As every new government puts forward different visions for future industries, it is realistically impossible to work on a new technology for more than three to five years,” said an official at a state-funded research institute.

Korea’s exports to China, its largest trading partner, decreased by 9.9 percent in the first nine months of this year, while Germany and Japan saw their shipments to the world’s second-biggest economy fall by 15.2 percent and 12.5 percent, respectively, over the same period, according to figures from the Korea International Trade Association.

But the country is in no position to be complacent with the less disappointing performance, as its exports of intermediary goods to China is set to be reduced sharply in the coming years as the world’s No. 2 economy is focusing on expanding its local supply chains. Intermediary goods accounted for more than 70 percent of Korea’s overall shipment to China last year.

“Korean companies should strengthen efforts to expand their presence in China’s rapidly growing consumer markets,” said Kang Du-yong, an analyst at the Korea Institute for Industrial Economics and Trade.

Analysts say it also needs to be noted that boosting domestic consumption will result in helping exporters by easing the upward pressure on the value of the Korean won through increased imports.