Korea’s FEZs appeal to investors as gateway to China 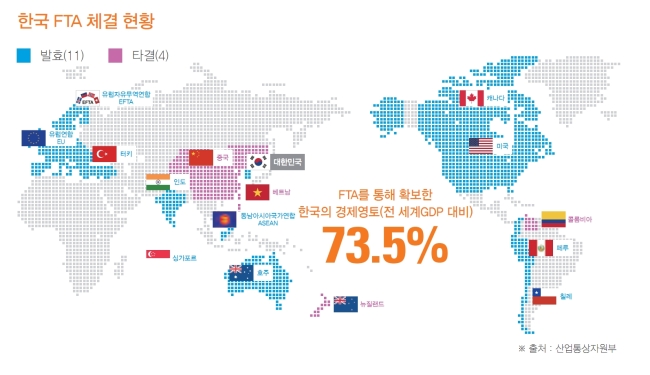 Korea’s eight free economic zones nationwide, including Incheon FEZ and Saemangeum-Gunsan FEZ, are paying close attention to the National Assembly this month, with lawmakers starting discussions on the ratification of a free trade agreement with China, signed by the two governments in June.

FEZs, specialized areas designed to encourage foreign investors, have long waited for the launch of the Korea-China FTA since the two nations started talks back in 2012, hoping the trade pact with the world’s second largest economy will sharpen their competitive edge as a destination for foreign direct investment.

“The FTA with neighboring China, which will eliminate 90 percent of import tariffs across 17 areas over the next two decades, will transform Korean FEZs into a gateway to the Chinese market,” said an official of the Ministry of Trade, Industry and Energy.

Upon the implementation of the trade deal, China will immediately remove tariffs worth 6 percent of its annual imports.

The number of foreign companies, who jumpstarted to invest in Korea as part of their efforts to tap the Chinese market, is already on the rise. As an example, according to the ministry, a midsized Chinese food company has recently decided to build its production base in an FEZ here. The company will be able to export the “Made-in-Korea’’ processed food products ― considered as premium items in China ― to its home country without paying any tariffs in the near future.

“In short, if tariffs are reduced, products produced in Korea will have a competitive edge in China compared to products manufactured in other exporting countries, the ministry official said.

In preparation for an era of the Korea-China FTA, the Korean government has pushed for a deregulation drive for improving the competitiveness of FEZs, which already have better business and living conditions for foreigners compared to other regions in Korea.

Besides existing incentives to foreign investors ― including corporate and income tax reduction benefits and cash grants for foreign high-tech companies ― the government has improved infrastructure for exporting companies located in FEZs, offering them easier and simpler customs and logistics processes.

The foreign talent employment ratio in companies within a FEZ is sought to be increased to 30 percent from the existing 20 percent.

The government will also seek incentives to attract service industries, where Korea has room for growth.

In their attempts to nurture service industries, FEZs are seeking to build casino resorts and to lure health care businesses with the support of foreign capital.

“The trade deal with China is expected to attract FDI from countries and regions such as China and the Middle East,’’ Korea’s FEZ authorities said.

A growing number of FEZs are creating a complex for Chinese companies offering a variety of benefits. Saemangeum-Gunsan FEZ in North Jeolla Province, which is part of the Yellow Sea Rim economy and boasts of its proximity to major markets, including China, Japan and Russia, is one of such FEZs to create a zone for Chinese firms.

“FEZs will continue to lead FDI attraction not only as a business hub in the Northeast Asian region but also as a gateway to the world’s second largest economy,” the trade ministry said.