According to the OECD Health Statistics 2015, an average of 29.1 people per 100,000 committed suicide in 2012, about 2 1/2 times the OECD average of 11.9, based on data compiled for 25 of 34 OECD members in the same year. Data from 2012 on Austria, Canada, France, Iceland, Ireland, New Zealand, Slovak Republic, Slovenia and the United States was not available in the report. 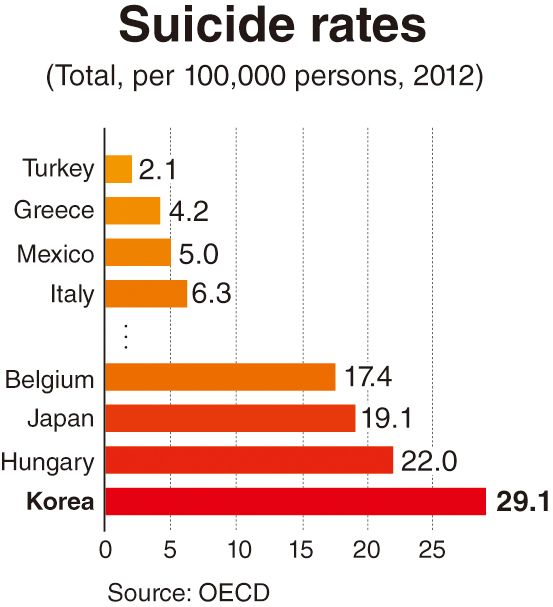 Even after expanding the scope to outside the OECD, only Lithuania ― at 29.5 per 100,000 ― had a higher rate of suicide than Korea.

While the country’s rate hovered around the OECD average up until 1995 ― marking 12.7 ― the figure jumped to 21.7 in 1998 when the country was hit hard by the Asia financial crisis.

The sky-high suicide rate for Koreans was also apparent among students.

Separate data revealed by Rep. Kang Eun-hee of Korea’s Saenuri Party showed that 17 students had committed suicide due to stress from school grades as of Aug. 17, accounting for roughly 23 percent of 61 students who took their own lives during the same period this year. The number of suicides from academic-induced stress in the first semester of this year has already surpassed the nine from 2014. South Korean schools operate two semesters a year with the first one starting in March and the second in September.

According to 2014 data by Statistics Korea, suicide was the No. 1 cause of death among people aged 10 to 39.

While Koreans showed a relatively high tendency to take their lives, they were ranked near the bottom in various criteria in quality of life.

According to Korea’s 2015 edition of OECD’s “How’s Life?” biennial report to provide a comprehensive picture of well-being among OECD countries, the country’s health status, work-life balance and subjective assessment of well-being were ranked 33rd, 31st and 29th.

Korea’s health spending is also heavily dependent on the private sector: Public sources covered only 56 percent of the spending, compared to 73 percent for all OECD countries.