By 옥현주
Published : Aug 24, 2015 - 18:07       Updated : Aug 24, 2015 - 19:23
The gap in life expectancy between South Korean men and women is higher than other member countries of the Organization for Economic Cooperation and Development, a recent report by the Paris-based club of advanced countries showed.

Korean women’s life expectancy came in fifth among the OECD nations, while that of men ranked at 20th in the group. 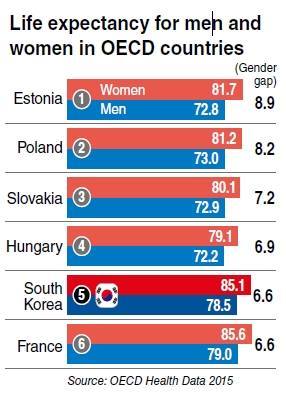 The life expectancy for the combined population of Korea was 81.8 years, 1.4 years above the OECD average of 80.4 years.

Iceland had the narrowest gender gap in life expectancy at 3.2 years, behind the Netherlands, New Zealand and the U.K. with 3.7 years.

Countries including Italy, the U.S., Germany and Australia also had a gap of less than five years in the life expectancy of men and women.

One of the reasons behind the nearly 7-year gap in life expectancy between Korean men and women might be the higher smoking rate for men, the report suggested.


About 36 percent of Korean men smoked daily in 2013, the third highest rate among OECD countries. But only 4.3 percent of women smoked every day, the lowest in the OECD bloc.

OECD data also showed that the more adults smoke, the less likely they live long in general, which hints at a link between the short life expectancy and the high smoking rate.

Nearly 44 percent of Greek men aged 15 or older smoked in 2013, the highest rate across the OECD bloc, followed by Turkey at 37.3 percent and Korea and Estonia at 36.2 percent.

Life expectancy for men belonging to countries with the high smoking rates was relatively short, with Greece ranked 17th (78.7 years), Turkey at 29th (73.7 years) and Estonia at 32nd (72.8 years).

Men from countries that smoke less than other OECD nations had longer life expectancies, with Sweden ranked fifth (80.2 years) and Iceland at second (80.5 years).