Here in Seoul, some entertainment districts featuring cafes, theaters, cinemas and concert venues are formed near college campuses, although the mood is slightly different from place to place. 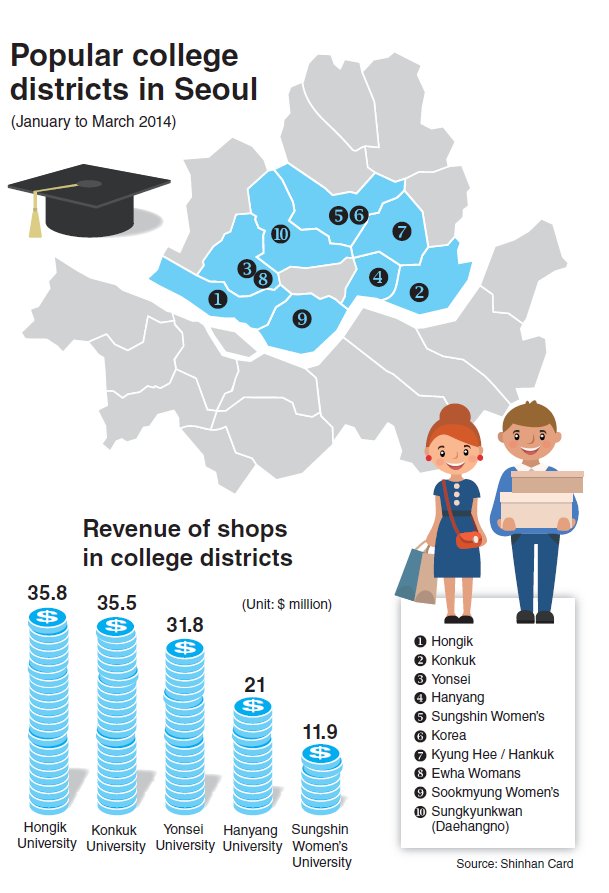 Currently, the busiest college district is the Hongdae area in the western end of Seoul. Located near Hongik University, which has one of the nation’s top fine arts colleges in South Korea, the place is known for its urban arts, indie music culture and clubs. Walking the street, visitors can easily spot street musicians -- singers, guitarist and dancers.


Male guitarist Jung Sung-ho, who has done street performances here for five years, said, “Hongdae is a good place for musicians. I regularly have performances here, hoping to be spotted by music-related people and to jump-start my career.” It was Wednesday night, but around 50 people were watching him play.

Hongdae is also known for its indie scene, live clubs and underground musicians. On the last Friday of every month, “Live Club Day” is held in multiple clubs with a variety of genres including rock, jazz, hip-hop and electronics. Visitors can get access to any of the clubs with one ticket for just 20,000 won ($17).

About a 20-minute walking distance from Hongdae, there is another busy college district called Sinchon near Yonsei University. The cafes and bars in Sinchon are less expensive than in the Hongdae area, as most customers here are college students hanging out to eat, drink and enjoy nightlife. The place is recently becoming more family friendly after the district office designated the place as a “streets without cars” area during the weekend.

“The ‘streets without cars’ have brought an increase in the number of street performances and events here,” Chun Yoo-jeong, an official at the district office, said.

Last month, a 350-meter-long water slide and water gun festival on the street attracted tens of thousands people to the district.

Daehangno, near Sungkyunkwan University and located in the heart of central Seoul, is another popular college district. “Daehangno” literally means “College Street” in Korean. Students from Seoul National University used to gather here before the school moved near Gwanaksan in 1975. Since SNU moved, Marronnier Park, where street artists are easily spotted now, was formed and many cultural arts organizations related to plays, movies, concerts and musicals have moved in.


Every September, street performance festival D.FESTA takes place at the park, featuring mimes, circus acts, musicals and dance. Walking a few minutes from the park, one can also visit hillside village “Ehwa mural town,” an artsy tourist attraction that was adorned by 60 artists as a public art project in 2006.

An area near Konkuk University campus located in the southeastern part of Seoul is also popular. Inviting all age groups, the place offers a multiplex shopping center along with a bunch of bars and restaurants.


Recently, Common Ground shopping complex, a mall built by stacking 200 shipping containers, is garnering attention for its independent brands. Inside, there are many small but unique shops, cafes and restaurants, targeting young shoppers.

“This is my first time to come but I like the relaxed and free atmosphere and unique items here. I may come back again,” said Lee Eun-young, 25, a college student, who visited the mall with her friend.