Does Korea benefit from FTA with EU?

July 1 marked the fourth anniversary of the EU-Korea free trade agreement, which entered into force in 2011. It was touted as the first of a new generation of FTAs, going further than any previous agreements in lifting trade barriers. Being also the EU’s first trade deal with an Asian country, Korea was expected to benefit immensely.

In addition to eliminating duties on nearly all trade in goods, the FTA addresses nontariff barriers to trade with a specific focus on the automotive, pharmaceuticals, medical devices and electronics sectors.

It also creates new opportunities for market access in services and investments, and includes provisions in areas such as competition policy, government procurement, intellectual property rights, transparency in regulation and sustainable development.

All this has definitely had an impact on EU-Korea economic relations, with bilateral trade growing immensely. More European goods are now more visible in stores and many European companies have entered the market. In fact, the EU was the largest investor last year, injecting a total of $6.5 billion, followed by the United States ($3.6 billion), Singapore ($1.7 billion) and China ($1.2 billion).

This would seem to indicate that the deal is a tremendous success. But is it?

The Korea-EU FTA reflects the larger trade strategies both sides have pursued from the beginning of the 21st century.

Prior to the mid-2000s, both were reluctant to enter into bilateral FTAs, preferring to conduct trade through the World Trade Organization and through regional preferential trade arrangements. However, they changed track and have been pursuing FTAs aggressively since.

The FTA with Korea was part of a new wave of EU FTAs and part of an overall strategy referred to as Global Europe that the European Commission announced in 2006. The strategy was developed to respond to the challenges faced by EU members in a rapidly globalizing economy. An objective of that strategy was to work towards reducing tariff and nontariff barriers in trade and to liberalize markets for foreign investment.

As part of the Global Europe strategy, the EU has engaged in FTA negotiations with the objective that the FTAs are more appropriate vehicles to address more trade complex issues and can serve as building blocks toward a more robust multilateral trading system.

The Global Europe strategy sets down two main criteria for selecting FTA partners: (1) that the partner country offers sufficient market potential and (2) a sufficient level of growth opportunities that would result from the removal of tariff and nontariff barriers as a result of the FTA. Based on these criteria, along with the fact that Korea had negotiated an agreement with the United States, the European Commission identified South Korea as a priority country for an FTA.

As for Korea, for nearly a decade, it was transforming itself into an FTA hub in Northeast Asia. Signing a network of FTAs was a key part of the national economic strategy of President Lee Myung-bak as well as his predecessor Roh Moo-hyun. Both presented FTAs as necessary for advancing Korea’s economic well-being.

Ongoing competitive pressure from Japanese firms, increased competition from Chinese enterprises and the rapid aging of the Korean workforce heightened the sense of urgency to boost national competitiveness.

President Lee set a goal of building a “free trade network” that by 2014 would enable over 70 percent of Korean exports to enjoy duty-free access. He explicitly tried to diversify the composition of Korea’s FTA partners, simultaneously negotiating FTAs with large advanced economies as well as with natural resource-rich developing countries.

The Korea-EU FTA also fit into his goal of creating the “Global Korea” by expanding Korea’s engagement with and presence in the international community.

As a result, negotiations were launched in 2007, and after more than two years of negotiations, both sides finally signed an agreement on October 6, 2010. Both the Korean National Assembly and the EU Parliament have ratified the agreement, and it went into effect on July 1, 2011.

On the other hand, the much larger EU market of 492 million people with a gross domestic product of $14.4 trillion was much more important to Korea. In 2009, the EU was the second-largest market for Korean merchandise exports, with a 13 percent share of total Korean exports, second to China with its 24 percent share.

Among the EU member countries, Korea’s largest trading partners were and continue to be Germany, France and the United Kingdom. 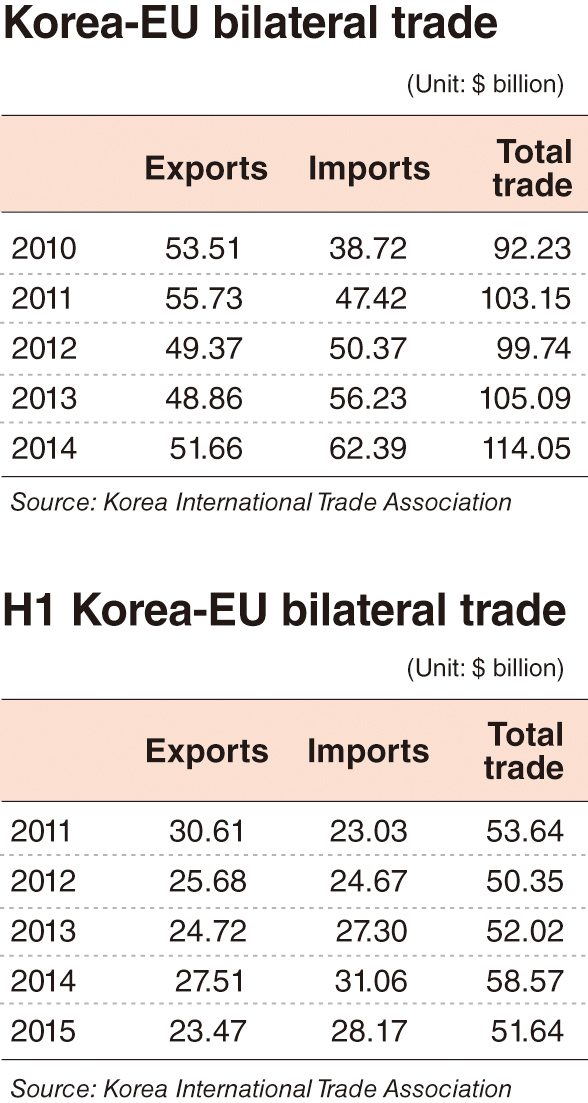 This clearly indicates that Korean companies have not been able to take advantage of the deal to the same extent as EU companies.

This trend is also acknowledged by the European Commission in its annual report on the trade deal submitted to the European parliament and Council in March.

It noted that the EU’s share in Korea’s total imports from the world increased from 9 percent before the FTA to 11 percent in the third year of the FTA implementation. Over the same period of time, the EU‘s share in total exports from Korea declined from 11 percent to 9 percent.

“Chemical products”, where exports increased by 9 percent in the third year of FTA implementation, accounting for over 12 percent of total EU exports.

Other categories of products for which EU exports increased significantly since July 2011 are “mineral products,” “wood” and “pearls and precious metals.”

Significant increases were noted in plastics, mineral and chemical products.

That is as far as product classification goes, which clearly indicates that Korea’s exports are not really much diversified.

In fact another set of data also shows some disappointing results. If we look at the figures for the first half of the year starting from 2011, something strange can be seen. Bilateral trade between Korea and EU in the first six months of 2015 is actually less than the first half of 2011, before the trade deal was implemented. In 2011, bilateral trade amounted to 53.64 billion, while it registered 51.64 billion this year.

Taking a closer look, we can see that it is Korean exports to the EU that have drastically gone down, while EU imports into Korea have increased.

This is worrisome for Korean companies, which shows that the economic slump has affected them more than their counterparts in the EU. This certainly needs to be investigated by scholars.

In fact, according to a recent survey of 360 major companies in 18 EU member countries by the Korea Trade-Investment Promotion Agency, more than seven out of 10 European companies are taking advantage of the FTA to promote their business opportunities.

The awareness of the Korea-EU FTA among European companies is far higher than that for the EU’s free trade deals with other countries.

About 34 percent of the respondents said they have increased imports of Korean products since the implementation of the bilateral free trade deal.

Clearly, the Korean government has its task cut out for it to ensure that the effects of the trade deal benefit both sides. At present it appears to be one-sided.

Moreover, Korea’s exports to the EU are concentrated into a few sectors, such as ships, automobiles and electronics. These three sectors represent almost 60 percent of Korea’s total exports to the EU, in contrast to exports of other countries that are much more diversified. This requires attention.

As noted in a report by the Korea Institute for International Economic Policy, in order to take full advantage of the FTA, it is necessary to not only increase the utilization rate of tariff preferences, but also improve the business environment and productivity and upgrade industrial structures in Korea.

“With more countries committing themselves to comprehensive FTAs with the EU and the U.S. and Korea relocating more of their production bases abroad, it is more likely that exports from domestic production will be replaced by overseas production. As a result, Korea’s relative advantage as an early comer in the FTA is likely to be obsolete. In this context, it is necessary to increase the utilization rate of the FTAs in the short run and to use the FTA as occasions to strengthen industrial competitiveness in the long run,” the KIEP noted.