‘I’d rather be alone’: polls show trend of singleton

Comparatively, 30.1 percent said their life of solitude was “so-so,” while only 6.2 percent said they were not happy, the poll by the Seoul Institute, a research organization under the Seoul Metropolitan Government, showed.

As for the difficulties faced by the single households scored between 1 and 10, 10 being the hardest, economical aspects received 6.77 points, followed by emotional factors such as loneliness (6.21), instability in housing (4.59), critical views from other people (4.38) and difficulties related to shopping and other daily life necessities (4.09). 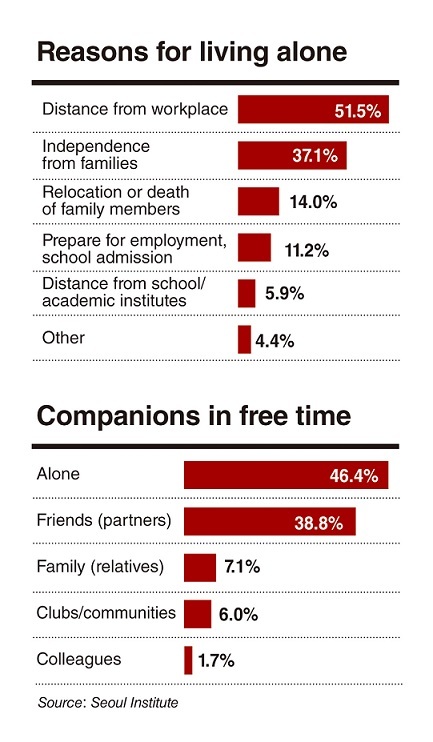 More than half, or 51.5 percent said they lived alone due to the distance from their workplace, while 37.1 percent said it was to become independent, 14 percent due to relocation or death of family members and 11.2 percent to prepare for employment or academic admission.

In their free time, 57.8 percent said they watched television or videos, followed by those playing computer games or searching the Internet with 25.8 percent, those seeing cultural and arts events with 25 percent, resting with 24.9 percent and traveling or engaging in outdoor activities with 20 percent.

Nearly half, or 46.4 percent, said they enjoyed such leisure activities by themselves, while 38.8 percent said they spent that time with their friends.

Those in their 40s and 50s tended to spend free time alone more, with the rate even higher among those with lower income, the survey said.

“When the time comes where one out of every three households in Seoul are single households, it would be inevitable to review various systems and policies that currently center around multiperson households as the ‘average’ type of household,” the institute said.

According to the Statistics Office, the rate of single households in the city is expected to reach 30.76 percent by 2035.

With economic difficulties and social isolation being the biggest problems that a rise in singleton households poses, it is imperative to seek solutions as a community, it added.

The poll was conducted on 500 single-household members aged 20 and over via the Internet, with 95 percent credibility and an error range of plus or minus 4.4 percent points.