Future of Korea depends on first movers, not fast followers

“Korea is a society moving forward, but it stands at a critical juncture. In a world of rapid change and fierce competition, Korea will lose ground unless it changes its fast-follower mindset, which worked well in an era of industrialization. Now, it needs a new model for future prosperity, led by innovative talent.” said Peter A. Underwood, the author of “First Mover,” published in Korean in 2012.

His messages have changed little over the past three years. In other words, Korea has made little progress in shifting to a new paradigm for a better future.


“There has been little obvious change, but I believe Korea will succeed if the country achieves critical mass for a shift; this is a country with the capacity for rapid change,” said the senior partner at IRC, a Seoul-based business development consultancy.

Korea’s unique “ppalli-ppalli” culture, always trying to get things done quickly, can be helpful in a transition. However, he warned against moving too quickly in one direction, underlining the risk of accidents. He stressed the importance of peripheral vision to check for risk factors while keeping pace. “You can go fast, even while juggling the ball,” he said.

The reason so many people listen carefully to his advice is because Underwood is one of few foreign observers to have deep thoughts on what is needed for Korea and Koreans to move forward. His love, ideas and insights about Korea are part of his family legacy. He is the great-grandson of Horace G. Underwood, the first ordained Presbyterian missionary, who arrived in Korea in 1885 and later founded Yonsei University and Saemunan Church.

Living permanently in Korea for the past 130 years, the Underwood family members have left many footprints in Korean history in many sectors, including religion, education and medical science. As an example, his late father Horace G. Underwood Jr. and his uncle Richard F. Underwood served as interpreters at peace talks at Panmunjeom during the Korean War from 1951 to 1953.

Mission in the corporate sector

Peter Underwood is hard to beat as a foreign expert on Korea’s business environment. Since 1988 when he joined IRC, he has helped international companies bridge the gap to enter the Korean market.

Taking a different path to his ancestors, he found his vocation in the corporate sector rather than as a missionary.

With his three decades of experience in the niche market, Underwood also clashed with and combatted outdated corporate cultures and the talent evaluation practices of Korean companies.

“The order of seniority and hierarchy in organizations, combined with the passion and diligence of Koreans, enabled Korea to make great progress economically in a short period of time,” the business consultant said.


The problem is that the formula for Korea’s economic success is now an impediment as Korea transforms into a creativity and innovation-driven knowledge economy.

“Creativity comes from challenge and when competing points of view rub against each other.” he said.

To bring change into Korea’s organizational culture and achieve greater synergy in the creative economy, Underwood pinpointed the importance of reforms in the educational system. “We need the educational system to teach critical thinking (for problem-solving) and self-discipline from a very young age,” he said.

He also remained critical of the traditional criteria for talent evaluation at Korean companies.

“We focus too much on ‘specs’ such as university degrees rather than pure talent, creativity or innovation. We assess talent by external appearance rather than by internal strength,” he said, referring to the popular practice in which Korean job seekers pad their resume with qualifications and test scores.

Finally, the Korea-rooted foreign businessman advised Korean companies to increase the “tolerance of failure” to implant creativity into their organization culture, adding that success tends to come only after several failures.

Citizens of the world 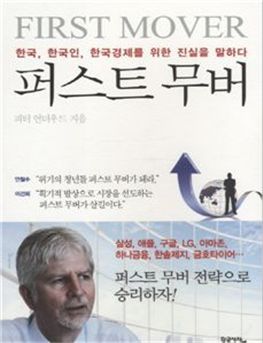 The year 2015 is a meaningful one for the Underwood family. Turning 60 this year, the current patriarch will become a grandfather later this month as his only daughter, who lives and works in Saudi Arabia with her husband, is expecting her first child. Extending now to the sixth generation, the Underwood family has naturally stretched beyond Korea and become global citizens.

“I think of myself as a cosmopolitan citizen of the world,” the fourth-generation descendent said.

Regardless of time or place, their family legacy in Korea goes on as well as their love and dedication for Korea and Koreans.