According to the state cultural heritage agency, a year-long excavation effort found the site of the first electricity plant, established in 1887, during the late Joseon period (1392-1910).

“It’s a great achievement that gives us an understanding of electricity development in Korea,” said Min Byeong-geun, curator of the Korea Electric Power Corporation Electricity Museum, during the press view of the site, Wednesday.


Electricity was first adopted by King Gojong of Joseon in the late 19th century. He signed a contract with Edison Illuminating Company in 1884 to construct an electricity plant inside Gyeongbokgung Palace. The idea of adopting electricity was first proposed by a delegation, the “Bobingsa,” sent to the U.S. to observe and learn “advanced culture” in America.

The plant was completed in January, 1887 and started to generate electricity between January and March. It was located between an annex of Heungbokjeon, where Gojong used to greet foreign delegations and hold cabinet meetings, and Hyangwonjeong pond and his chamber.

“The electricity generated from the site was used to light the chamber of King Gojong and the queen and surroundings,” said Ji Byong-mok, director of the National Research Institute of Cultural Heritage, which orchestrated the excavation project. 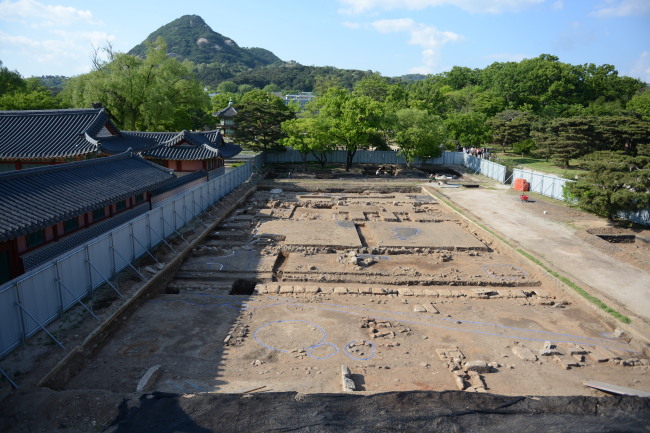 The plant generated electricity with coal and used water in the Hyangwonjeong pond to cool off the generator. As it used water from the pond, people called the light “water light.” It was also nicknamed “bum light” because the light went on and off frequently due to the unstable system. The plant was capable of generating the brightness of 16 candlepower for arc lamps, which produced light by an electric arc.