“As Kim Jong-un’s distrust toward core senior officials has been deepening, he is strengthening his reign of terror by purging those officials without going through legitimate protocol,” an NIS official told media, declining to be named. 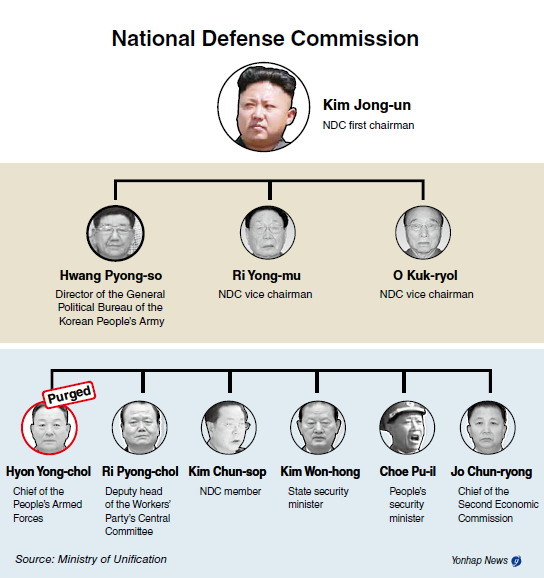 Most recently, Hyon Yong-chol, the chief of North Korea’s People’s Armed Forces, was executed for talking back to Kim and dozing off at a military event. An anti-aircraft gun was used to kill him, according to the NIS. Observers say the execution method highlights the brutality of the dictatorial regime.

Hyon was one of the scores of senior officials recently purged or executed despite their contribution to the young leader’s efforts to consolidate his power in the military, party and government, according to the NIS.

Chang Yong-seok, a senior researcher at the Institute for Peace and Unification Studies of Seoul National University, said Kim might have eliminated those who were disgruntled about his dogmatic push for seemingly unfeasible policy initiatives. He also pointed out that amid a series of purges, Kim’s legitimacy as a leader could weaken.

“Purges and executions could take place against those including technocrats who might have raised questions over the viability or feasibility of Kim’s economic and other projects that he has dogmatically pushed for,” he said.

“Kim might have felt a sense of inferiority and growing pressure to press with them and make them successful. Thus, he might have eliminated those who looked skeptical of his initiatives,” he said, noting that doubts might be emerging among the power elites over Kim’s handling of state affairs.

Some analysts, however, believe it is still premature to conclude that the execution and purge of senior officials show that his leadership is weak.

“Yes, some people would say that Kim’s leadership may be so unstable that he should resort to this reign of terror. But others may think that Kim is still in the process of consolidating his power by getting rid of those who would challenge his leadership,” said Koh Yoo-hwan, a North Korea expert at Seoul’s Dongguk University.

“Despite his ruthless executions, no one in the military seems to have risen up against him and challenge him, which could also indicate that Kim’s leadership is fairly strong. Kim has frequently demoted or promoted top brass, and executed many of them, and this could also mean he is taking stable control of the military,” he added.

Kim’s power base has been regarded as weaker than that of his late father Kim Jong-il as he took the helm of the reclusive state in 2011 after just several years of grooming. But his father was groomed for the leadership over nearly two decades ― long enough to consolidate his power.

His relatively weak power base, coupled with a lack of experience in statecraft, Kim appears to be resorting more to a brutal way of controlling the top echelons in the North, analysts said. His reign of terror could also be based on his temperamental personality, they also noted.